A Long Road Ago 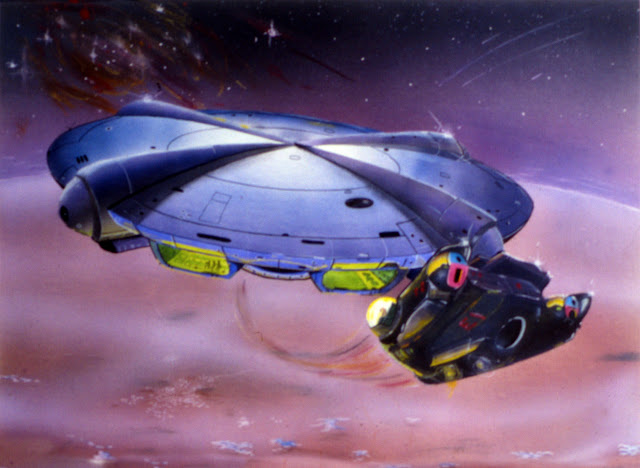 I ran across this airbrush painting I did in 1985 this morning. Computers were still monochromatic, the Mac had just been released the previous year, the art school I was attending had Apple IIs in the lab, and my friends and I were experimenting on the weekends with scanning art into a Fat Mac with a dot-matrix printer. Back then my aspirations were very, very simple. Could I find a way to make a living doing what I loved to do? Frankly I had no back-up plan.

I grew up in rural West Virginia. My Father was a coal miner until he retired. So I was not surrounded by artists, or creatives growing up. Everyone in my family worked had for a living. My Summers I worked for my Uncle in the construction business, pouring concrete, digging foundations, and laboring under the sun. It was good money and honest work. I enjoyed it. I was young and I learned a lot. I was always learning. Always curious. And a voracious reader. And doodler. I sold my first art piece to a kid at school for five bucks in the sixth grade. It was a drawing of Iron Man. But I had no idea you could potentially make a living creating art. No idea. I never even thought about it until my junior year in high school.

Everything changed for me while reading an interview with a comic book artist when he happened to mention how much money he had made the year before. I immediately dropped my college science and math courses and begged the HS art teacher to teach me three years of art in one year. She agreed because, unknown to me, I was already on my way. I had always drawn, doodled, and created art. I had sketchbooks full of the stuff. I drew a comic for the school newspaper. And once won an editorial cartoon contest in the local paper. I dunno why it took me so long to make these connections, but that's the way it happened.

Why am I boring the shit out of you with this history lesson? I dunno. Maybe it was the young 3d artist that reached out to me this week for advice. Maybe it was stumbling across this old airbrush piece from back then. Maybe I'm just in a reflective mood right now as I struggle to pick up the pieces of a career that got deflected along a different path a long, long time ago. And maybe, just maybe I often wonder about what might have been had I not taken the other path. Which is just a mental fuck job us older people do to ourselves. Because the path I did choose led me to an incredible career and insane opportunities. I have no regrets.

Mostly though I think it's potentially worth sharing because someone who is reading this needs to hear it. Maybe you are young or struggling with choices about your own career path and what direction your own career should take. And possibly you need some encouragement from an increasingly old fart who has been there, taken chances, made mistakes, and tried to live a life without regrets. Because someday, sooner than you realize right now, you'll be in my shoes. Looking back and realizing that it never ends. The struggle doesn't get easier, it only changes.

I'm writing this today worried about the same basic things that 16 year old worried about. A lot has changed and I'm certainly much more experienced than he was. I also know things he couldn't possibly have imagined. But I'm still worried about making a living doing what I love. Strange huh?

So be encouraged. Life is shorter than you anticipate and now is the time to take chances, be courageous, and accept and face risk. As my character Rixx would say, "Undock and face the universe. You never know what adventures await." I think that is great advice not only for young aspiring artists, but for us old-timers as well.

As always, keep the courage.