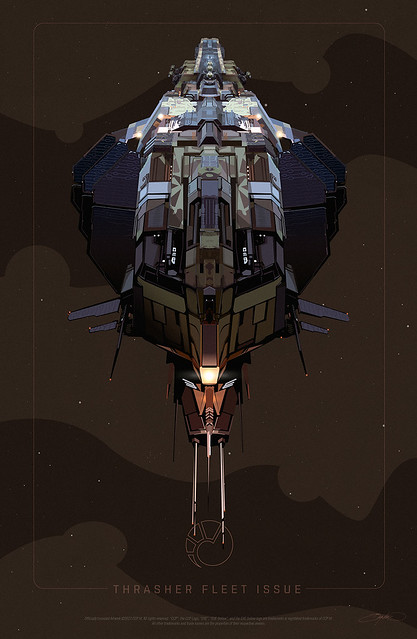 Today I released the latest piece in my new Minimalist Illustration Series for the Thrasher Fleet Issue over on RixxJavix.com - this is going to be the last new piece for a bit. I'm taking a short break from the insanity of the last month or so. I had a lot of pieces in the pipeline that needed to be finished and I've gotten a lot of new pieces out over the past few weeks. I still have a ton of work in the pipeline, including  a really nice Ragnarok piece that I've been working on - but I need a break. Not long. But I need to focus on some non-Eve work.
Yesterday's post was misunderstood in various corners of the Eve community. Which is understandable. Various corners of the Eve community are dedicated to misunderstanding me. Sometimes that is because they have their own agendas to propagate. Or they just don't bother actually reading and comprehending what I'm saying. Either way it can be rather amusing watching them spin my words around to fit their own narratives. Which is fine. They say if you aren't annoying someone you aren't doing your job. And Bob knows, I can be very annoying.
Piracy is NOT dead. Solo is NOT dead. It would be foolish for me to say such a thing. And out of character. I've been an advocate for both for a very long time. There is no mistake however that Uprising has fundamentally altered the course of Low Security space. The entire paradigm has shifted under our feet and we are all racing to catch up. This is true. For those of us that live and play on the edge of acceptable conduct within New Eden it is a daunting change. The basic rhythm of space has changed, tactics, ships, and more. Entire classes of ships have been forever altered and changed. Roles have been rewritten. This is undeniable.
But essentially the world is the same as it has always been. Solo is hard for those of us who choose to pursue the honorable path of good fights and refuse to simply out-game the system for easy kills. And this is where most of the misunderstandings come from. For most players the answers are simple, to win at any cost. To roll those abyssal mods, to bling out the slots, to camp the gates, to use your Loki to pop frigates and run up the zKill board with numbers. And, this is the important part here, good for you. I will never tell anyone, anywhere, how to play Eve. Goodness knows sometimes I find myself in those situations as well. But that is not the Stay Frosty way.
Our way is different. And for a lot of players it can be challenging to understand why we play the way we do. And again, just to be clear, I'm talking in sweeping meta allegory here. But one which impacts the smallest of choices. An example for you. Yesterday I came back to station after a long roam and noticed a pilot in local flying a Wolf. I chatted him up in local and found out he had just returned to Eve after an extended break. I asked if he'd be interested in a 1v1. He agreed. So I undocked a Wolf and we met in space to fight it out. Someone else in local typed, "You can always count on Stay Frosty for good fights."
To me that perfectly encapsulates the entire mission of Stay Frosty, the history, the earned respect, the knowledge that a 1v1 can be accepted and appreciated (no one is going to uncloak a Loki next to you), and why our approach to the game is so different than most. And no, I'm not saying we are the only ones. There are a few others.
But when I talk about my concerns regarding Low Sec space and the changes that Uprising brought with it, I'm talking about my concerns about that play-style. And I do have legitimate concerns about it. I always do. I had concerns back when I founded Lucifer's Hammer and left Null Sec behind. I had concerns when I was kicked out of Tuskers and started Stay Frosty almost ten years ago. And I've had concerns every single day since then. That is my job. And I won't stop.
And if writing blog posts about it is upsetting you, then I suggest you stop reading. Because I've been writing blog posts about it since January 2010 and I'm not going to stop now.
Yarrr!