[ Gooder Eve is a series of on-going articles that examine ideas that might make Eve more gooder, and maybe even more funner to play.  Some are serious, like the Chameleon Module, and some are humorous.  But all should be interesting, entertaining and encourage healthy debate. So far the comment threads have been the best part. ]

Back in November 2010 I wrote a Gooder Eve post about a massive Interceptor carried one-shot missile called a 'cap buster' that was designed to help kill Super Caps. You can read about it yourself. 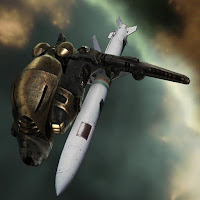 Concepts are fun. I think 'em up and post 'em without any consequences, mostly to stir debate and get people thinking. It is one of the reasons this is the most entertaining* Eve blog in da whole wide world! ( *Rixx Foundation private study results )

As much fun as concepts can be, I always try to base them on reality. During WWII such a concept was actually implemented, called Dam Busters, HIghballs, and other catchy names, you can read about the history here.

However, knowing what we know about Eve and its players, such a Cap Buster in the hands of 'Ceptor pilots wouldn't end very well now would it? Swarms of these things would decimate Cap Fleets and keep them home in fear.

This means the basic idea, the concept itself, is flawed? Not in my opinion. I still think a dedicated individual pilot should have a tool available that would inflict serious harm on a large Cap ship. The idea isn't just purely a romantic one. It is, after all, the heart of what makes Eve special.

So let's alter the concept a smidgeon and see what happens. Let's create a new Class of BS called the Bludgeon Class. Available in 4 racial flavors, the Bludgeon BS can only mount one Cap sized weapon and must work together in groups of at least three. They are tied together by a new module called an "Array", the array is an energy field generated by each ship that binds them together and allows them the energy needed to fire their weapons. Individually the ships cannot fire their Cap weapon, only together can they do so in one massive volley. However, together their signature radius is equal to a Cap ship so they are vulnerable to attack. To counter this, they can lock Cap sized targets faster than Cap sized targets can lock them.

The Array only works in limited range and each of the BS must be coordinated. While this isn't exactly the "individual" pilot wrecking havoc against a Cap ship, it is a compromise intended to alleviate swarms of ships destroying the entire point of having a Cap fleet. But wouldn't there be swarms of these things also? Nope, because of the special properties of the Array, only a limited number of Bludgeon groups can be on grid at once. Neat huh?