Eveotorial: The Elephant in the Room 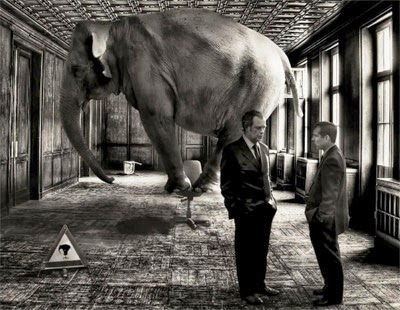 A wave of insanity splashed onto the shores of the Eve Community last week, sparked by my fellow blogger and CSM member RipardTeg in his Bonus Room post.

I've been quiet on this up until now, although it did spark my humorous Jita post from a few days ago, because I've been busy starting an Alliance - but mostly because this thing smelled like a rat from day one. It was easy to see what was going to happen, what did happen, and how it would all play out. There wasn't a need to address the shenanigans more than they were already being addressed.

People have been banned. A victim's name has been bandied about and his (and his wife's) humiliation has been made public. This is, I believe, the greatest crime of all. And I strongly feel it is the elephant in the room. No one is talking about it.

I have much respect for Ripard, I am a daily reader and have been since his blog started. We sometimes speak outside of blogging, I believe I've helped him many times and I know he has helped me many times. But on this issue I feel urged to call a spade a spade.

The victim was humiliated twice, once by the scammer, and once again by a blogger who should know better. I think he already knows this, the cancellation of his series and recent back-pedaling on his site would seem to indicate some wisdom in hindsight. I hope so. But the damage has been done. There was a way to get the results that needed to be gotten, without making the entire incident public. A human being is on the other end of that conversation, a human being who was verbally assaulted and then exposed to the wider Eve community.

I wouldn't have known about this had it not been for Repard's post. I could only bring myself to listen to small pieces of the Bonus Room audio. Perhaps I have to much empathy for the people on the other end of that conversation, for both sides. I feel for them all, because they are all victims in one manner or another. I have zero tolerance for such activity. Had I known about it beforehand I would have written CCP immediately and demanded action be taken. But I wouldn't have written a blog post about it. Just as I have never written one before about other incidents.

You have given the aggressor a platform and humiliated his victim.

For someone building to a point about bad behavior in Eve, I believe you exhibited some very poor judgement. At the very least.