on January 22, 2010
One of the many things I do for a living in real life is create identities for companies, sports teams, charities, just about any type of organization you can think of.  So last year when it was announced on the LFA Forum that they wanted a new Alliance logo, I obviously jumped at the chance.

Creating an identity for an in-game Alliance isn't as easy as it sounds.  And strangely enough, my professional background was a huge disability for me.  That might seem like a strange thing to say, surely my experience was an asset?  Well sorta.  The possible problem was that the process was going to be decided by popular vote, an open poll "Round Robin" to be held on the Forum.  While I certainly agree that was the best way to handle the process, it does leave open the aspect of public opinion.  And public opinion can be very fickle.  It can also often demonstrate really, really bad taste.  Believe me, I've sat through thousands of hours of focus groups to know that fact all too well.

I needn't have worried however.  After getting off to a slow start, I realized that the open forum actually helped me tremendously.  Mostly because I was able to gauge opinion as the process proceeded and adapt what I was doing accordingly.  This is where my experience did come in handy.  And while the final logo isn't exactly what I would have chosen, it remains something I am proud of.  Mostly because it manages to retain the tongue in cheek humor that I love, while also remaining one of the better Alliance logos in Eve. In my humble opinion at least. 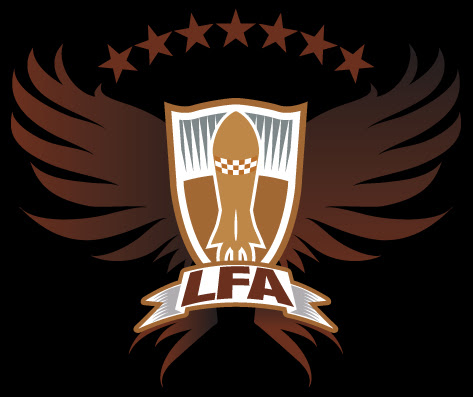 Sadly, despite having been incorporated last Summer, the logo itself has not yet been incorporated into the game itself.  I was hoping that it would appear after the patch yesterday, but it hasn't.  I remain hopeful that it will show up someday soon surrounding the TCU's in our systems.
Eve LFA logo