on January 20, 2010
One of the many ways to make money in Eve is by "ratting". Essentially this boils down to the slaughter of countless NPC characters that happen to live within the space you are in. There are many different races of these "rats" throughout the Eve universe and which one you happen to encounter depends on your location.

In the time I've spent in Eve I've destroyed thousands of these aliens. The process isn't difficult and can often be a bit boring to be honest, so you have plenty of time to think, or actually do something productive. I remember thinking at one point about those whose ships I was exploding. Did they have families somewhere back home? Was someone worried about them and waiting for them to come home for dinner? Did Liberal minded citizens of Eve care about those families and children left behind by the devastation that I was helping to bring? Probably.

And, if so, would they hire an advertising agency to create a campaign to bring awareness of these Sansha Families to light? Sure, why not. And if they did, this would be the first ad in that campaign. 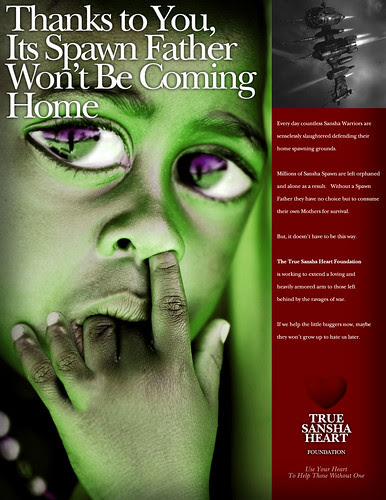 You can see the full-sized version by clicking HERE. Enjoy.
Ad Eve Sansha