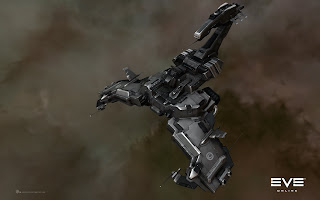 You can read about the new Scorpion and potentially more on this blog post over on BattleClinic.  It looks like the Summer 2010 Expansion will be bringing with it some new designs for certain ships.  With the promise of more in future expansions.  No word on how many will be included in the Summer Expansion.
In my humble opinion the Caldari ships have always seemed much "older" in design than the other races.  And I don't mean in terms of role-playing age, but in terms of game design age.  Like Atari 2600 versions, big, clunky and without a lot of style.  It is heartening as a primarily Caldari pilot that they'll be getting a much needed make-over.  Yeah!  I have to admit, the Scorpion is much better.  I may even have to start flying it more often now.
Click the image for a much bigger preview.