on March 30, 2010
I thought it would be interesting to produce a Crew Call poster for each of the four races in Eve.  I know the reality that they would actually post such a poster inside stations is probably remote, or the fact that many people seem to believe that these massive ships are piloted solely by Capsuleers, but I still thought the idea worthy.  So today you get the first in the series, for Amarr.

I imagine Amarr as a kind of Victorian England gone mad with religious fervor, at least that is how the Empire seems in my imagination.  I admit that I am the last person who adheres to a strict interpretation of Eve cannon, in my opinion if it doesn't directly affect my game play then it isn't all that important.  However, I also know that it is important to many people and I've also come to respect it more and more as I write this blog.  So I've tried to stay as true to the subject as possible.  Within my own creative license of course.

This is what an Amarrian Crew Call posting might look like posted in a station in the Amarr Throne Worlds: 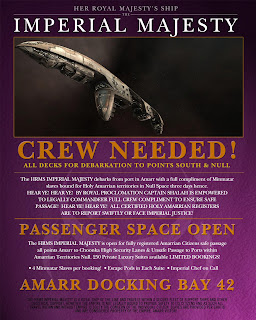