on March 04, 2010
Yesterday I wrote my first piece of Eve Fiction.  (The post is below this one in case you're interested.)  I did this primarily to enter this contest over on the Eve forums.  I admit it.  I had no plans on writing anything at all yesterday, so this was entirely spur of the moment.  I gave myself one hour, which happened to be my lunch hour, and pounded out the story "True Sansha". That is how dedicated I am, I gave up my lunch for this blog baby.

If you've been reading this blog or catching up on it, the subject matter of the story might not have come as a surprise to you.  This ad I created about the fictional True Sansha Heart Foundation should give you some hint as to my interest in the little buggers.  Which I also learned yesterday, are not alien at all, but in fact a long lost spur of the human race lost to history and their fascination with making themselves more machine than human.  Ok, the contest said the story had to fall within Eve cannon, so I went with it.  Even though it isn't as interesting as the stuff I had built up in my own head over the last year.  That'll teach me to read eveopedia!

For everyone discovering EVEOGANDA for the first time, again I say welcome aboard.  This blog is primarily built around my fascination with Eve Online and some of the fan art I have created and continue to create based on the game.  But it is also more than that, it is also a place to explore other avenues of creativity, adventure, expression and just plain old fun.

When I started the blog I gave myself one ground rule.  Every day that I play Eve, I write at least one post.  This will be impossible to keep up with 100% of the time, but so far I'm keeping to a pretty great rate of compliance.  Although, one could argue, that such compliance comes with a price - such as posts like this one without much of a point to them.

But never fear dear reader.  Your host always has a special treat in store for his beloved, cherished and overly-complimented readership people.  A screenshot of my Shuttle laying a pod egg!!  Woot! 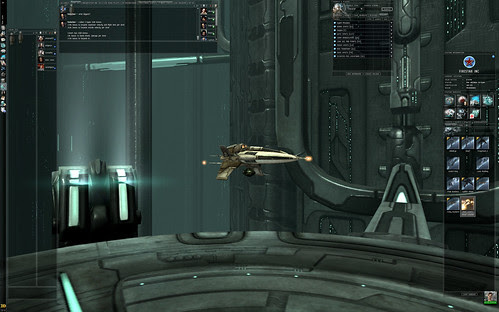 
Well, it's free! More later. And if you haven't read the story yet, for god's sake why not?!