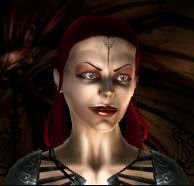 I've always had a hard time with Alts.  Even in the Corps I've belonged to, I tend to get the Alt situations mixed up and generally just ignore the "who is the alt of who" stuff that goes on.  This isn't because I am incapable of remembering, it is simply because I just don't care.  Or I haven't cared.  I was always a one account guy, heck I never even created any Alts on my account.  Why would I?  You can't skill train them, so other than price checking in Jita, what purpose do they serve?

I held on to that opinion for a long time, but I am always open to new ways of looking at things and that initial opinion started to evolve over time.  I think the more complex the game becomes for you as a player, the more opportunities you begin to see another character becoming a solution.  It is also nice to be able to fly other ships.

So at the end of last Summer I started a new account and a new character.  I created "her" as the in-game Wife of my main character Rixx Javix.  Her name is Anastasia Javix and for a long time all she did was skill train, haul stuff down from Empire to a low-sec drop off and run chores for RJ.  But about two months ago, she was the focus of a new long-range plan for Rixx.  Along with my friend Angor and his new character Violet, we began discussing the possibilities for the future.  These plans were extremely primordial in nature, but we felt that the best thing for our new characters would be for them to form a new Corp and hang out together for awhile.  Continue skill training and start making their support/logistics/industrial role more official in nature.

Those plans continue to form and take shape in our minds and I'm sure there will be more about that here in the coming weeks and months.

The cool part for me is that Ana is Amarr, and since RJ is Caldari and Gallente, I had never been able to fly Amarr ships before.  So now I'm getting the chance to fly a Harbinger and shoot lasers at people.  Which, having been Ammo dependent for so long, is a lot of fun.  Ana certainly isn't a PvP'er, but I do enjoy running missions with her sometimes.  And the other day she bought a Providence to move my supply of minerals from one place to another, as Ana has started to seriously pursue a manufacturing career.  Whoa, that is a big ship!  It takes about a decade to align, but even so it was fun flying it.
AJ Alt Ingame