What a difference a day makes

on March 05, 2010
I returned to Providence for one very simple reason, they were finally doing something.  I'd been away for over four months and much had changed that I wasn't aware of when I decided to return.  But I thought I could help with the campaign in Catch, could contribute my portion to the war effort.  And so I spent a good solid week selling my assets in Insmother and hauling what was left all the way back to Providence.  What I found there was not what I had left there.  But for the first two weeks of my return, things seemed to be going well and I put my full effort into Sov warfare.  Killed a lot of SBUs and enemy ships.

I think we all understood that we were riding a dangerous wave.  If -A- ever decided to focus on Providence, there wouldn't be much we could do to stop them.  Not full force.  I've known that fact since I first moved to Null Space over a year and a half ago.

Upon my return I resumed my self-appointed role as Minister of Propaganda and had already issued several pieces on the forums.  I believed, and I still do, that such efforts actually do help.  And so it came to a few days before January 28, 2010.  The day -A- would invade D-GTMI and we would finally go toe-to-toe with our neighbors and be completely pwned.  You wonder about me saying that?  C'mon now, hopefully you know me better than that by now.  Let's be realistic here.  We all knew what would happen, at least the grunts did, I can't speak to the leadership since I had given up my part in that process when I had left the last time.

Having said that, we were all more then willing to give it the 'ol college try.  My ships were fitted and standing ready to be sacrificed.  And I issued this Propaganda poster a few days before to get people ready. 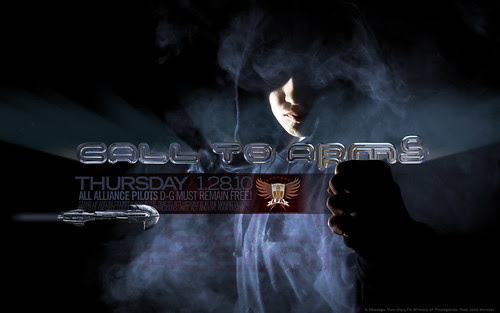 
Obviously that day turned out to be a slaughter.  Of Providence.  For my part I gave four ships to the effort, but I didn't shoot anyone.  The first ship was lost that morning to bad intel, jumped right into an unreported red gang.  I made it back to the gate and jumped right into another red gang.  Lol.  It happens.  The worst loss was the last one, I had waited in a nearby system for almost two hours sitting next to a Titan waiting to be bridged into battle.  When it finally happened, my ship was caught between two systems.  The original system showed on the overview, the new one in local and my ship was invisible... for almost an hour.  Finally, in frustration, I logged.  When I re-started I was in my clone.  Apparently my ship hadn't really been invisible after all.  Imo this was a horrible example of game mechanics gone wrong, and not the only horrible example that day, but CCP doesn't see it that way. Whatever. No sour grapes.

The next day I issued the following version of the above: 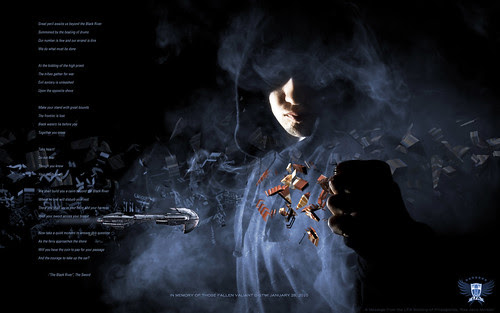 
The rest, as they say, is history.