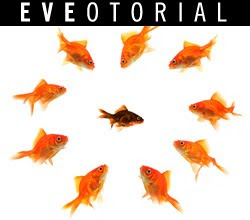 Tobold certainly stirred up some debate on his site and plenty of my fellow Eve Bloggers have picked up on it already.  I won't waste my time or yours responding to his post directly, but I do have some thoughts regarding the core issue.  Is PvP in Eve fair or unfair?

In my opinion this brings up the whole issue of what exactly IS fair?  I have four children and this is a concept that they struggle with, that probably all of us struggle with growing up at one point or another - life simply isn't fair.  Beloved family pets die, people get sick, taxes go up, hurricanes hit, monsoons ravage, criminals get off, the list of unfair realities is extensive and well documented.  But how does that translate into a virtual world?  For most of us, having spent x number of years playing "video games", we've been taught that we are the center of the universe.  In some ways this exploits the same child-like innocence that rails against life being unfair.  Because in the child's mind, they are the center of the universe.  They have not yet learned one of life's harshest lessons... you aren't.  In fact, the universe barely knows you exist.

This can sometimes be a hard lesson to learn.  In fact, it can be so difficult that many of us choose to hold onto it in various ways throughout our lives.  In sports, at the workplace (Steve got that promotion instead of me, that is so unfair!), at home, in different and varying degrees these are all coming from the same place.  In fact, most of our struggle is in coming to a balanced understanding of this core concept and our place in the universe.

Most video games and most MMORG play to this weakness.  By making the player the Hero they stack the deck against fairness by making it possible for you to "win".  But there is no "winning" in life.  We have triumphs, we have failures and often we just have surviving, but no one wins.  I'll stop there because I don't want this to get sidetracked into a much deeper discourse and philosophical argument.  Suffice to say that most games play to our inherent need to have the world be "fair" - which isn't fair at all because we want to win.  We want to be the Hero.  And most games help us achieve that goal.

Eve doesn't play that card.  Eve is structured more like the real world than any other game I've played before.  But I've heard the cry before over and over again, it isn't "fair".  I struggled with this issue when I first started playing.  I came to Eve with lots of "video game" baggage.  I thought I could jump into a ship and start being the Hero.  I lost a LOT of ships that way.  I rapidly became discouraged.  On several occasions I came very, very close to quitting the game.  Many players do quit.  Eve doesn't have the player numbers that other MMORGs enjoy.  It isn't fair.  But it is real.

I came to that understanding slowly and through a tremendous amount of work and help from other players.  And time.  I've come to appreciate the unique unfairness of Eve.  Even today I get the surge whenever I jump through a gate, what will be waiting for me on the other side?  When I lock an enemy ship I have no idea what I am getting myself into.  My heart pounds and I get a rush that I don't get from any other virtual game I have ever played.  Is it fair that my ship sometimes gets blown up by another ship that it shouldn't, under any normal criteria, have been blown up by?  No, it isn't fair.  But it is real.  And it is the single most important thing about Eve in my opinion.

In my in-game life I stopped asking why Eve wasn't fair a long time ago and I decided to do something about it.  I haven't always succeeded, but I'm proud of the fact that I made that decision.  In many ways, that decision is part of becoming an Eve adult. Accepting a more mature and balanced outlook on the universe and your place in it.  Work with it or work against it.  I decided to work with Eve, to learn its ways, to slog through the hard times and revel in the victories.  It is a glorious thing when it goes your way and horribly unfair when it doesn't.  And I love every minute of both.  Some more than others.
Editorial