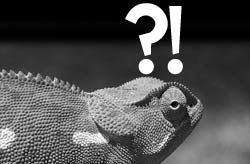 A corp mate and I were talking about this this morning and this is a Super Awesome idea.  I kid you not.  Think about this for a second, it's like a Cloak and works in much of the same ways as a cloak does, except it is visual and not invisible.

Let me illustrate.  A Badger Mk II warps to the gate and gets caught in a drag bubble, almost 37k from the gate.  A Dramiel is in the bubble and rushes to engage.  The poor Badger is dead right?  Not necessarily, because it isn't a Badger at all!  Lo and behold it is actually a Tengu!!  Now the tables are turned on our buddy the Dramiel.

That is how the Chameleon Mod works.  It is a high-slot module, like a cloak, that visually changes your ship to look like another ship in the same race as the one it is fit on.  I could easily see skills changing the type of ships you could disguise yourself as, Level One maybe only frigates and transports, but Level Five maybe Carriers?  Also, would there be a delay after de-activating the mod?

It is far too easy in Eve for some pilots to prey on certain other pilots, and little that a solo pilot can do to stop them.  Oh sure you can fleet up the boys and go hunting, but if you're flying alone you are in trouble.  We have that situation right now in my new home system, we've had a cloaky Punisher in system for the past week preying on unsuspecting transports.  There is two sides to that of course, but catching that annoyance would be so much easier with a Chameleon Module.

On scans and in local your ship would appear to be what it is disguised as being.  But that cloaky drag bubble guy would have to think twice about attacking now wouldn't he?  Maybe that is a Badger and maybe it isn't.

As much as I like being the guy killing things in the drag bubble myself, I have to admit that I like the idea of this.  It seems to achieve some pretty good results from a game balance perspective.  It would slow down the ganking, which is either good or bad depending on your perspective I suppose, but it would re-balance things just a tiny bit.  On the other side, perhaps a new type of probe or mod that could detect the Chameleon mod if properly trained?

The Chameleon Module could be made to be skill intensive and have some drawbacks, and even some counters, but if you think of it like a cloaking device it starts to make some real sense.  Some might say, well then, why not just use a cloaking device?

Ah, you're missing the point.  A cloak is designed to hide you from a fight, the Chameleon mod is designed to make you be attacked.  And that my friends, is the beauty of it.  You'll be in more fights.  They just might not be as lopsided as you've gotten used to.

[Thanks to Uagtd, who thought something like this would've been a cool subsytem for Strategic Cruisers, which is what started the whole conversation.]
Editorial Eve PvP