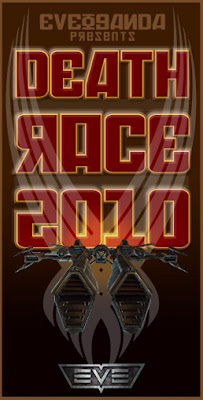 On Sunday, August 22nd, hundreds of Eve pilots will embark on a dangerous, crazy and highly competitive race from their low-sec launch system, through the murky gate-camped systems of zero space and emerge once more into Empire!  It is a race to the death!  Only the lucky, the criminal, the insane will survive victorious.
DEATH RACE 2010 is open to ALL Eve pilots who wish to participate and pay the one-time entrance fee.  Gangs, Corporations, even Alliances are free to enter, but the prizes and trophies will be awarded to individuals only. (What you do with them after that is up to you of course.)
How does it work?
It's simple.  To enter just pay your entrance fee indicating the name of the in-game character who will be participating in the race.  The entrance fee is non-refundable and will be used solely for the Race prizes.  If you don't show up on Race day you don't play, simple as that.
The race route will be kept secret until right before the start of the race, details will be increasingly specific as the day approaches.  But we don't want to give the zero space residents time to overly prepare now do we?  The race will leave from one low-sec system, race through a zero space region and end in another low-sec system.  There will be checkpoints and race moderators stationed along the way.
Aggression and fighting amongst the racers IS ENCOURAGED!  This is a Death Race, the only way to ensure you win is to prevent anyone else from finishing!  Prizes may be awarded not only for first, second and third place finishes, but for those racers with the most kills.  And potentially others as well, details will be revealed as the race day approaches.
RULES:
• Entrance fee is 5 million isk per racer
• Enrollment begins on August 1st, 2010
• Shuttles and Cloaky Ships are not allowed
• Ships that can fit a Cyno are also not allowed and using a Cyno is forbidden
• Aggression is permitted after the race starts
• Gangs, Teams and Corps are permitted (But each racer pays the entrance fee)
• Fleet up will occur in a low-sec system to be announced
• The Death Race is Sunday, August 22nd and will start at 18:00 Eve time
> Other details will be announced as race day approaches.  Details regarding entrance fees and enrollment will be posted shortly.
How can I help?
If you like the idea tell your friends about it, post about it in Corp chat, Alliance chat and anywhere else you talk about Eve.  If you're a blogger, write a post about it.  If you want, I have graphics available that you can use on your site, just write me at rixxjavix@gmail.com and I'll send you some nice buttons.
If you are interested in sponsoring the event, providing additional prizes, or helping out in any way, just let me know.
I'm announcing this on Eveoganda first, posts on Eve Forums and Battle Clinic forums will be going up shortly as well.
I've given this a lot of thought over the past month or so, I wanted to create an event that anyone could participate in - not just a select few.  Even if you're a Noob you can afford the five million isk fee and race to win.  The monkey wrench is that this isn't just a race, it's a Death Race.  So you need to consider several factors when choosing your ship, speed, survivability, strength and perhaps most importantly, the unpredictable nature of zero space itself.  You'll have no control over what response the residents of the region choose to do, gate camps, bubbles, it's anything goes.
It should make for an exciting event.  If you have feedback, suggestions, concerns or comments now is the time to let me know.  Are you interested?  Planning to participate?  Would you or your Corp like to sponsor a prize?  Or just form up a team?  Start thinking.
Join In-Game Channel: DEATH RACE 2010


PS: I've already gotten tremendous feedback and the post just went up!  Thanks to everyone who has written and offered help, much appreciated.  I wanted to get the fire started this week and see if this was even something anyone would even be interested in.  Plus I need some time to work out the details and logistics before opening it up to everyone on the forums, etc.

Some good news, EON Magazine has offered to profile the EDR2010 Winner in an upcoming issue!  Potentially, although this is still early, the winner could also be featured in a full-page advert in the upcoming issue!  So good things are already happening, so keep the word going and let's see how much we can shake up this sandbox.
Death Race event