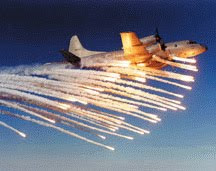 
In the modern world of warfare, if your plane is under attack by the enemy there are several options available to you.  The first is probably starting to take evasive maneuvers, which is an entirely different discussion when it comes to Eve, but the second is most-likely Counter Measures.  And if you happen to be in a transport plane, like the one in the picture, it might be your first choice.

So... in the science-fiction technology universe of Eve... we have no Counter Measures?  Once your ship is locked it stays that way?  Unless you manage to fly out of range, once locked you are locked until one of you dies.  Click - lock - done.  I don't know about you but one of the hopes I continue to have for Eve is the Dogfight, the Star Wars encouraged dream of the Red Baron vs. The American Escadrille of WW1.  Two ships locked in a death struggle of machine, technology and skill.  The state of the Dogfight in Eve right now is more about the machine and the technology than it is about the skill.  Evasive Maneuvering?  Counter Measures?

Much of Gooder Eve is concerned with trying to encourage the realization of that dream.  I love Eve and will continue to play it even if it never changes again, but I love it enough to think it can continue to get better.  When the rats I fight in an Asteroid Belt can destroy some of the missiles I shoot at them, but I can't... something needs to be looked at.

I know we have ECCM and ECM bursters, defender missiles, Warp Core Stabilizers (which seriously need to be neuted and re-thought btw) and other devices available to us.  Fine.  But part of making the experience of Eve Gooder is also making the visual experience of Eve Gooder.  Remember that dream of the Red Baron?  That is a visual dream, the dance of combat in the skies, the white clouds, the blue sky, the twisting ground... visuals.  Sudden flare bursts blossoming from my Interceptor, breaking the lock of the Rapier, twisting away towards the gate, only to be locked up by the Crow that just warped in, firing off my screen rockets, trailing smoke and fire... isn't that a nice visual image?

Surviving isn't about getting away, surviving is about killing.  I want to live longer than my opponent and I'm sure he wants the same thing.  Maybe the counter measures don't break lock, they only confuse it momentarily?  While Target Dampeners and ECM keep your opponent at bay, counter measures give you the opportunity to survive a bit longer.  Maybe long enough to find another way to gain the upper hand, to get the sun at your back and bring down your adversary.

I have a lot of other ideas to share, next time.
Eve gooder Opinion PvP