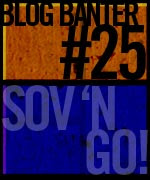 Welcome to the twenty-fifth installment of the EVE Blog Banter, the monthly EVE Online blogging extravaganza created by CrazyKinux. The EVE Blog Banter involves an enthusiastic group of gaming bloggers, a common topic within the realm of EVE Online, and a week or so to post articles pertaining to the said topic. The resulting articles can either be short or quite extensive, either funny or dead serious, but are always a great fun to read! Any questions about the EVE Blog Banter should be directed to crazykinux@gmail.com. Check for other EVE Blog Banter articles at the bottom of this post!


This month's topic comes to us from @Tetraetc - "Tetra's EVE Blog" - who asks: "Have Alliances and the sovereignty system limited the amount of PVP and RP potential in Null sec? Imagine a Null Sec where anyone could build outposts wherever. Would the reduction of the alliance game mechanic, and the removal of the sovereignty game mechanics (or the modifcation of it from Alliance level to Corp level for that matter) force more PVP into Null sec, or would giant power blocs like the NC still form themselves?"

It is extremely humorous that this Blog Banter topic is THIS Blog Banter topic.  I really enjoy universal irony and the fact that I am little more than the plaything of the Gods.  But I have my sense of humor and it serves me well, without it I fear I may lose my grip on sanity.
Having said that I will, as always, strive to answer the posed question as best I can.  Hmmm, let me think... PFFFFT!!!
All we need is to make taking, holding and running Sov more difficult, confusing and ridiculous.  But let's start with the topic discussion points and address them one by one shall we?  Has the sov system limited the amount of PvP in Null?  I guess it depends on your definition of PvP.  Here is my definition of PvP: "Player versus Player".  When it comes to Sov the fight never comes down to Player versus Player and always comes down to Alliance versus Alliance, so what we are really talking about is AvA combat.  And AvA combat boils down to numbers and foundational manipulation of lag (FMoL), a complex structure of Nathan Forrest's "Git thar firstest with the mostest men" strategy of war.
The Sov mechanic is better now than it used to be.  The Sov mechanic is not responsible for inflicting any harm on PvP one way or the other.  It is often blamed for it, but it isn't the problem.  The problem isn't game mechanics or rules or sov or alliances or corporations at all.  Do you want to know what the real problem really is?  (You say you do, but you really, really don't.)
The real problem is people.  People cluster, build forts, erect walls and hide behind game mechanics because that is what people do.  Since the first monkey jumped down out of a tree and ran behind a big boulder so the lion couldn't see him and figured out if he hid in the hole under that boulder... chicks would hide with him... its been this way.  People horde and hide.  That is their nature.  They spend countless hours building up virtual assets and running bots in deep belts to amass hoardes of virtual blinkies that they don't want to lose.  So they erect walls and build forts to protect themselves and their precious things. PvP is hurt by this mentality.  Not by sov, but by human nature.  The only "PvP" these people will allow themselves is HUGE Napoleonic AvA combat, protected by their Titans and their SuperCarriers and their armadas of hundreds and thousands.
This human nature is anti-game.  And it forms the core conflict of Eve, when you boil the rest away, you are left with two camps: The Hoarders vs. The Players.  Right now the Hoarders have the advantage in numbers, they dominate the Northern Elbow, hiding behind their walls and their forts.  They don't realize the ultimate irony in their stance because they refuse to see it, in the end... there is nothing to protect.
It's a game.  And no matter what is done to the Sov Mechanic (And plenty can be done) it won't change human nature.