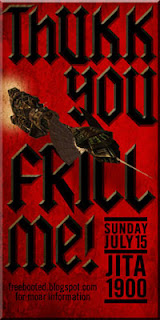 To say that this has been an unusual week would be the under-statement of the year. What started out as a curious, "uh wut?" moment when I first saw the clipped Vagabond pop up in my hanger, has quickly grown into a groundswell of support, silly avatar pictures and even a live in-game event. Plus, according to my friends, even more to come.

So I thought a bit of a round-up post was called for, to let sit over the weekend. A place to catch our collective breath and see what we've accomplished.

So let's take this from the beginning:

1. Back on May 24th I wrote a post entitled Minmatar V3, in which among other things, I said the following: "But don't screw this up. Remember the heritage and embrace it. Don't be afraid to add teeth to the Vagabond. Don't be afraid to keep the strange Pirate Ship back-deck on the Rupture. Embrace your Minmatar brothers and their struggle against tyranny!"


2. They didn't listen and they circumcised one of the most iconic features in the entire game!

3. As usual, my immediate response was to promise that I would mock this mistake openly until someone fixed it. Which I did HERE and HERE.

4. Since that wasn't working, despite the insane numbers those efforts were pulling, I decided to continue mocking but in a different way.  This is when the Frill Seekers were born, a dedicated group of Tweetfleeters unafraid of being seen wearing a Tudor Frill/Ruff to support the poor Vagabond.

5. Since I don't visit the Eve Forums very often, my pal Swearte started a Forum Thread to get official CCP attention of this issue. You can visit that thread here and add your voice to the growing ground-swell of support. Go there and post if you haven't done so already.

6. Then Seismic Stan over at Freebooted came up with the idea of an in-game protest to show our support. The graphic I created is now in my sidebar and the event, while still in the early planning stages, looks to be something you won't want to miss. Follow the link to learn more about THUKK YOU, FRILL ME!!

I've reached out to all of the CCP employees that I know and asked for their help. CCP Manifest is wearing a Frill in support and I've sent one along to the CEO, I haven't seen him using it yet however.  Other than that, we wait.

What we don't do is let them off the hook. My Loot, Your Tears has a great post up about it, as does Arydanika over at And Knowing Is Half the Battle.

If anyone else has spotted any other activities please feel free to link to them in the comments. As always, my comment section is open to anyone.


It is Summer and many people are on vacations. Next week is a Holiday here in the U.S., so some people are away and activity always suffers around this time of year. We've built a lot of momentum this week, but despite my hopes that someone would just say "oops" and fix it, the Vagabond remains circumcised and missing its Frill/Ruff/Wings/Ears whatever.

The fight goes on. And I continue to mock openly.