Eve Memorial: The Ring of Fire 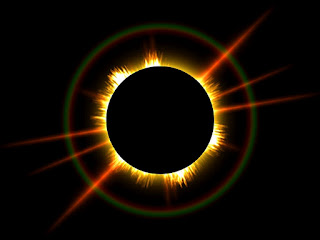 This is now a FORUM THREAD Register your support / comments / thoughts there!

The Eve community has responded amazingly well to this week's horrible tragedy. I have honestly never been prouder of my own association with Eve Online, CCP and my fellow pilots. What happened in Libya is nothing short of horrible and tragic and pointless violence. But, whatever the real world implications may be, we all have a virtual universe to live in.

There have already been calls to memorialize VR in-game and I wholeheartedly support those calls. The ideas have varied from a perma-cyno in Jita to a Titan wreck in a meaningful zero space system. Again, these are all good ideas. And I would support them. But, I wonder.

With a global player-base and around half-a-million players, the tragedy of this week seems almost inevitable. Something like this had to happen eventually. And as Eve continues to get longer in the tooth, such a tragedy is invariably going to happen again. And again. And again. This is in no way intended to take away from what happened this week, but it will happen again. For those of you young enough not to notice, we are all going to die someday.

What I'm driving at here is nothing short of a permanent massive memorial to the fallen in-game. Something that fits within the context of Eve, the universe, lore, and conventional mechanics.  If Capsuleers are the Gods of New Eden, then I think they deserve a God-like Memorial of significance. We humans, and I suspect Capsuleers as well, have historically erected large scale memorial systems to honor those that have passed away before us. I suspect that the future will not be all that different. Especially when it is an immortal Capsuleer that has passed into the great mystery.

To my mind, nothing symbolizes the "great mystery" in New Eden more than the Eve Gate. It is where our ancestors came from and beyond which is nothing more than the great unknown.

What I am suggesting is the creation of the opposite. A Great Ring of Fire on the opposite end of the universe from the Eve Gate. A dark hole that symbolizes the place where we go after death. The great beyond.

A place where the mechanic exists to immortalize those Capsuleers of distinction that have left us forever. Not those that un-sub never to return, but those that have tied their lives in a significant way to our universe and that we know have left real life as well. A hall of heroes if you will, a Hall of Fame, a grand memorial to the fallen.

I suggest inclusion in such a memorial would require action from the elected body of the CSM with final approval given by CCP. The details seem easy enough to imagine.

Sean's passing has, I suspect, left us all feeling a little mortal this week. I know it has made me feel the years pilling on. Perhaps this is one way to give something special back to Sean and the others that will eventually take his side, on the other side.

It is only another suggestion. As I said before, I'd support any memorial that happens in his honor. As always, I tend to think things through to their logical conclusion and how it impacts the game in the bigger picture.

Maybe now is not the time. But, then again, maybe now is the perfect time.