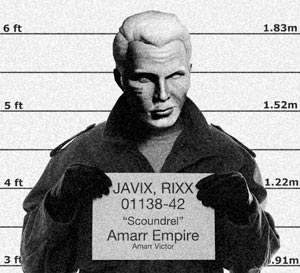 Yesterday Marc Scaurus from Malefactor joined our merry band of malcontents, which brings our total membership to around 15, give or take a few people still waiting in stasis. With about 4-5 more waiting to move assets, or otherwise need a week or two. I suspect by the end of next week we'll be looking at twenty or twenty-five members.

OPEN recruitment remains open until Odyssey lands. And yes, open means open. The only person I haven't accepted was a five-minute old player yesterday. I recommended they live a little first before taking the plunge in piracy. While young players are fine, I think you need some seasoning first. I don't want anyone getting frustrated and quitting Eve. Not on my watch.

I'd like to be at around 30 members by the time Odyssey hits. When building a new pirate Corporation you have to account for about 30% fall-off, those that join in a flurry and then realize the pirate life isn't everything they thought and decide to leave. This isn't my first time and we've already seen some of this. But those that remain, the ones that toughen up, take pirating to heart, accept the challenges of solo and small gang life... they are the core around which we start to build a successful Old School Pirate Corp.

Old School? Think Tuskers from four years ago. Heck, think about any great pirate corp from years ago, before they grew up and starting flying boosters in every gang, or joined Shadow, or started hot-dropping everyone, or bought a Titan. ( Despite what some think, this is not a criticism, everything changes.) If you can't think back that far let me help you, Frigate and Small Gang PvP. Men and machines. Sprinkle in a Battlecruiser gang every once in awhile, some derpy Cruiser gangs and a heaping helping of LOL Gangs! Remember those? Let's all put lasers on our Ferox's and go find trouble.

Oh sure, of course there are other people doing this somewhere. I'm sure my commenters will point them out. And that's great, we need more. I'm not trying to re-invent the wheel here. Just trying to go back to basics and do so in a way that lasts, that is casual and without politics and bullshit getting in the way.

It isn't going to be easy of course. Duh. We'll probably suck pretty hard at first. But for those willing to stick with it, well, the sky is the limit. Who knows where it'll go?

I don't. That's why we need you. It's a sandbox and we can build something, but only if you come and play.

Join EVEOGANDA in-game channel and let's talk about it.

See you in the funny papers.