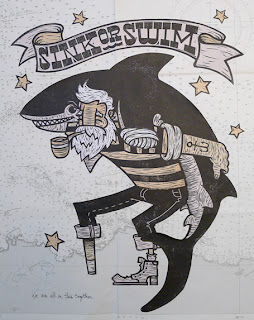 As Stay Frosty rapidly approaches the rather unbelievable milestone of 100 members, which we should reach in the next week or so, I thought it was time to address the idea behind our Open Recruitment policy.

Such an idea seems counter-intuitive based on Eve's history and the lessons we've all learned playing in this sandbox. It might work for RvB, for example, but building an entire Pirate corporation on an open door policy... well that's just borderline absurd.

Yes. It is. Which is one of the major reasons it is working so well. It doesn't make sense, it is counter-intuitive and it flies in the face of everything we know about Eve. Ha!

Granted this approach wouldn't work for everyone. Part of the reason it does work is because it is me doing it. I have this platform I've built and by extension the out-reach of that platform on Twitter and other places. I haven't touched the forums with a recruitment message, not a single one of them. That is also critical to the success of this approach, keeping it "in-house" as much as possible. Word of mouth, friendships, readership - those are the work horses that have been spreading the message initially.

None of this would be worth a hill of beans however, if it wasn't for another important fact - Stay Frosty is exactly as advertised. It isn't different once you get in, we aren't pulling your leg. In fact, it is even better when you get there, than you thought it would be. And as the days go on, our members are becoming friends, making connections, growing together and all that other sappy crap that actually makes a Corporation really, really work. And the eye opening bits, the relaxed atmosphere, the no-bullshit attitude, the desire to teach, share and undock and friggin' have fun? Well, that's all real. This isn't a smoke and mirrors job. We are really like that.

It isn't for everyone. We have had a few people leave us, I don't want Stay Frosty to be for everyone. It is a very specific kind of play-style and life, this pirate thing. Or whatever you want to call it. It shouldn't be for everyone. I don't think I could handle 500,000 members anyway! Plus, who would we shoot then?

Personally I'm having a blast. Stay Frosty is going extremely well and I couldn't be happier with all of our pilots. They are learning, sharing and generally not hanging around spinning-ships and waiting for something to happen to them. They are undocking and making something happen to someone else. And that, that is the difference between a sad, pitiful, unrewarding Eve experience and one full of adventure. In my humble opinion at least.

Want to talk? Join the EVEOGANDA in-game channel. It is always open. Just like us.