Dumb Ways to Do Work 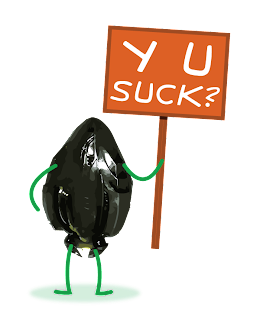 If you haven't seen it yet, check out the Eve Dumb Ways to Die video.  This post is about the creation of that video.

Now that the mad rush of Sunday and yesterday is finally over, I thought I'd spit a few words out in regards to the video and the song. I don't know if anyone will be interested and, as usual, I don't really care. I always enjoyed the "behind the scenes" features and this is kinda, sorta like one of those.

I've created, produced, directed and otherwise caused to spring into being hundreds of video, commercial and internet productions in my career. So I knew what I was getting myself into. Three minutes of animation is nothing to sneeze at. I originally considered a few options in regards to how to build the animations, including Flash, but eventually decided on using After Effects. AE is easy to use, does a decent job of rotoscoping, has some nice animation features built in and I've been using it since Beta, so no worries about bumping into a feature I'm not familiar with.

My biggest concern from the beginning was the animation of the "dancing pods". The timing is critical and they need to be alive and not mechanical. I finally decided that someone else had already done most of the work for me and so I rotoscoped my pods directly over the original "Dumb Ways to Die" animation. The single "Master" pod animation took about six hours of work to get right, but once it was completed the others could be cloned from him. ( My hand has still not completely healed from those six hours! )

A project like this is a battle of compromise with yourself. A balance between your desires and the realities of time and work load. I had plans for more types of pods, a zombie pod, a pod that losses its arms, a pod that had snakes, and some other types - but eventually you have to be realistic and keep things within a realistic scope. So some of the more esoteric ideas found their way into the back room.

Another compromise was on art. Originally I had intended to use only new art for this project. You can even see this in the video, the first four opening sequences are totally original and then after the first dancing pod chorus the next three are original as well. The Leviathan sequence is where I broke my plan. ( The Leviathan is the same one used in the second sequence btw) I could either put a tremendous amount of time into creating an original background of capital ships that would be onscreen for seven seconds, or use an existing background. I opted for the latter obviously.

I'm happy with all the sequences except the "legs on the internet" one. I had a much, much better idea for that one but simply ran out of time on it. What is there was intended as a placeholder, a sequence I would return to later if time allowed. Sadly time doesn't always allow for that.

I managed to get myself most of this past Sunday to finish the video. I thought it would take about four hours, it ended up taking nearly twelve. The mad rush at the end meant the last chorus of dancing pods is missing shadows. Which I didn't even notice until Monday morning. ( Yes, the fire pod is missing a shadow earlier, but he is on fire and so doesn't have a shadow. And yes, I do think of things like that. )

• The explosion graphic is the same graphic in the entire video.
• I used "Crap" because I wanted my boys to be able to see this.
• There are 114 layers in the final composite render.
• 27 Animation Compositions.
• I purposely avoided Easter Eggs, so there are not really any to be found.
• The upper-half of the "blood half" pod from the Blue Chorus was originally supposed to fall off and leave a trail of blood.
• I could have fixed the harsh edge on the fire pod, but I actually wanted some imperfections.

I've been remiss in not mentioning the song. I've done that on purpose. Sindel did such an excellent job on the song and her recent write-up that I have very little to add. I've written dozens of songs, jingles and whatnots over the years and what she accomplished, with very little help from me, is simply amazing. I'm very hands-on when I produce with an artist and since that was not possible in this situation, I tried to just leave her alone, send encouragement, and help with the lyrics a tiny bit. Mostly I just got her pointed in the right direction. She busted it and I am very impressed and extremely pleased with the results.

Will there be more to come? Maybe. I actually have an idea percolating around in my brain right now, so we'l see. I have a feeling you haven't seen the last of the dancing pods.

Speaking of which. FREE Wallpaper!!