on July 24, 2013
He awoke with a start, the Captain's Quarters still eerily lit in that strange half-day half-night mode it seemed perpetually stuck in. His back creaked as it always did after a night on the couch. When would the restrictions be lifted and a decent bedroom be allowed by the Stations? He rubbed his eyes and thought, probably not in his eternal lifetime.

The little girl stood on the dais in front of the screens. He didn't see her at first, her presence being outside the normally empty environment of the rented office. She was plain, small and obviously Minmatarian. Her hands raised imploringly and she vanished.


"Huh" he thought as his hand hit the Commlink. His wife answered, she was always up before him no matter how early he awoke. "How did you sleep?", she asked. He smiled. Even though they couldn't share the same apartment, he silently cursed the Station once again, she could still read his mind. "About usual," he replied, "Although this morning I've seen a ghost." "That's interesting," she said in that way that wives have of saying that make you feel insignificant, "What are your plans for today?"


Before he could make a smart-ass remark that he would be forced to regret for the rest of the day, he was interrupted by several apparitions materializing from the walls. About twelve or so horribly dressed Minmatar citizens shambling across the floor. All with that imploring hand-raised plea that the little girl had perfected earlier. "I've got more of them now, with me here in the office. I may have to call you back." They were getting uncomfortably close. "Don't you dare hang up on me with ghosts in your office." There was still a smile in her voice, but it was edged with concern. 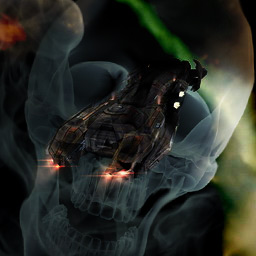 The oldest of the group stopped short and the rest waited, the amount of pleading only worsened in this paused state of affairs. "What are they doing?", his wife asked. But he barely heard her as he watched a Giant Secure Container form in the space before his eyes. It spun there lazily and he could hear crying, scratching and wailing coming from within the cargo container. The container burst into flames before his eyes. The leader, for that was all he could think of him as, looked directly into Rixx's eyes...


"They're gone now." His voice must have sounded far away. "Are you ok? Should I try and come over?" He thought about that for a second, knowing how hard it was to make that happen - it would involve a bit of daring do, some scaffolding, a ladder, a few bribes, and a death-defying swing from one gantry platform to another. "Uh, no need.  I have somewhere I need to be. Can you jump into the Impel and meet me at the Rani gate in five? Bring a few dozen med-kits and see if you can scrounge up a medical team or two?" He clicked off the Commlink before she could reply.


He called for one of his Thrashers, he needed something small and cheap. Going into high security space was no easy task, and while his wife could come and go as she pleased, it was a bit more of an issue for him. The dock manager wanted to know if he needed a crew and he waved him off, he'd handle this one alone, no reason to put anyone else at risk.


At the gate he outlined his plan and his thoughts to his wife. Most of the work would fall into her lap, since he'd be shot on sight by the sort-sighted buffoons of Concord. "I still think you're crazy, it's been five days..."  He smiled as he jumped his Thrasher in and she followed, "When have you ever known me to not..."  He became immaterial for a moment and reassembled on the other side, "... be crazy? Warping to the bookmark, follow when you can."


He arrived to an empty belt. He only had a moment, quick d-scan and he saw it, just as Concord started appearing in the belt next to him, he warped off again.  He saw the Impel land as he entered warp.  She'd know what he was up to.


This time he landed in an inferno, way closer to the sun than he liked. The Thrasher sealed up even though he was safe in his pod, automatic protection for the crew that would normally be onboard. Where was his wife? Already the police were landing, he only had a few moments. And then he saw her and the black ship emerge right on top of the can. He smiled as his board lit up like Holy Day and he was in his pod, without a ship around him.


The little girl was with him and she smiled this time. "I've got thirty or forty survivors, they're in bad shape but the meds say it's most dehydration and hunger... most of them should be ok." His wife's voice always in control. He knew the answer before he asked, "What about children?"  This hiss from space wailed in his ears, the little girl kissed him on the cheek, "The story we're getting is the bastards kept the children in another container... I'm sorry, but that one didn't make it."


The little girl, her name was Ran, smiled again and disappeared - like all good apparitions should. He didn't smile. He'd killed them when he ganked that Hulk last week. No indication the Hulk was smuggling slaves to Amarr, none at all. Goddamn nasty business.


He watched the police still circling his pod. Not a single one of them would stop and help. They punished but they rarely showed the first sign of human caring. Certainly Concord's hospitals would be better than the ones in Hevrice, but no help would come from that side. As usual. These were the self-same bastards that allowed slavery in the first place.


He watched the Impel enter warp and he followed it back to the gate.  "It's a goddamn hard universe Ran, honestly... you're probably better off dead."