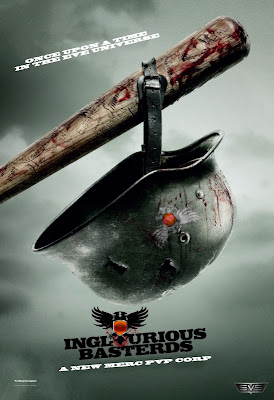 Way back in March 2009, when I had been playing Eve a total of six months, I decided to start my own corporation. Not only that, but I decided to leave Null and journey to Piekura and start a Mercenary Corporation.

This is how little I understood Eve back then.

I had maybe 5 million skill-points? I remember I had just trained T2 launchers for my Drake for goodness sake.

Believe it or not a few people actually joined our merry little band, but for the most part it was just three of us.

What we did was kind of brilliant in its own way for a bunch of newbs. We "made up" Merc contracts and War Dec'd corporations pretending to do it for "other parties". In general we accepted payment from the offended party in exchange for terminating the War Dec. We'd usually fly to their home system, blow up a few ships and then wait for the convo's to start. This actually worked a few times.

In one hilarious example you can see that I mistakenly War Dec'd a Corporation located way far away in Null Space. The entire thing was a massive boo-boo and based on some seriously wrong intel.

Remember I have about 5-6m sps at this time and no friggin' clue what I am doing frankly. We dropped that War Dec ourselves cause it was simply just too far away.

Despite some early success, our entire scheme primarily relied on ONE person in our Corporation who was much more experienced than me. To this day I am still not sure why he decided to follow us on this stupid adventure doomed to failure, maybe he was bored? But Master Selin was our hammer. Without him we wouldn't have won a single fight most likely.

But then he disappeared. Just at the time we War Dec'd the wrong group! (Nothing nefarious, the man had personal issues to deal with and ended up selling the character)

We ended up War Dec'ing a Corporation that had active members and things like Bhalgorns and shiny ships that they would use to camp us into station. There was nothing at all that we could do against that.

All I had was my wits. They even brought in a character with 67m skill points to help them kill us!

What they all didn't know was that our Corp was done even before the War Dec started. With Master Selin on hiatus, the remaining few members had vanished into the shadows. It was only Angor and me by this time. So the only thing I could do was distract them, move my assets during their off-time and then run away right under their noses while they watched me do it.

Which I did manage to do.

Turns out that Bonkers guy was determined to get me.

Our paths did cross again, several times, down in Providence. Good guy, not sure if the character is still active or being played by the same guy these days. But it is nice to know I have way more kills than he does. lol.

Inglorious Basterds lasted less than two months. And then I went straight back to Null once more. The entire episode was so darn silly in hindsight, but at the time I remember how simple and awesome it sounded. There are so many lessons we learn in Eve, but the ones that stick with us, the ones we remember, are the ones learned the hard way.

Nothing ventured nothing gained. And I learned a lot in those two months. And I don't regret a single second of being a really stupid, full of myself, Newb with no idea at all how Eve worked.

Ignorance might be blind, but it can also be a Hell of a lot of fun.

Some sample kills from back then:
Me fighting in a Raven
And in my new Crow