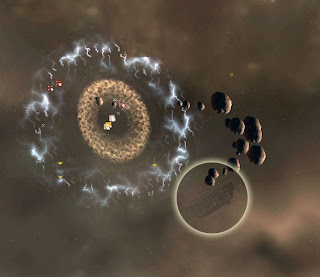 See that picture? I drew a circle around the idiot in that picture. Yep, that's me at three months old, cloaked above a belt in low sec, in a T1 fitted Drake.

I was once a True New Newb.

Because my Drake is invisible (!) you can't see how scared I was at that moment. Lots of ships were coming and going below me and they were exploding each other at a furious pace. It was chaos.

Y'know what I did? I waited. And watched. Remember, I am about four months old at this point, I don't know the first thing about fitting a ship, how to use a cloak, or what the Hell low sec is all about. On this day I have less than 10 kills to my name, most of which were group kills. I was a tourist in Low Sec, living mostly in Null space at the time. I was curious. And I was scared.

The field eventually cleared. Wrecks littered the belt and local dropped. A lone ship wandered from wreck to wreck looting. Every few minutes a transport would warp in, pick up the loot and warp off. Guarding the belt was a Sac.

If you think I was stupid for fitting a cloak on my Drake, you are really going to laugh when I tell you it had T1 Cruise Missiles on it. Oh god.

My plan was to kill the transport. I de-cloaked and aligned to the nearest rock. I suspect that the Sac pilot probably wasn't worried at this point, this is what I suspect today looking back on this. At the time I thought he best be worried, I was in a Drake with Cruise Missiles bitch.

The moment the Transport appeared on d-scan I warped. The Transport never arrived. I had landed right on top of the Sac. I crapped my pants. I fully expected to die. I didn't know what a Sac was, but I expected it to be nasty. It was red after all. But it just floated there and nothing happened.

So I shot it. Over and over again until it exploded.

My first solo kill in Eve was a mistake. My second was a friend. My third was an un-fitted Condor. And my fourth was a AFK Sac.


Yesterday I exploded a True New Newb and ended up speaking with him afterwards. It reminded me of me, and what it was like coming into this game totally unaware, blind and stupid.

But it also reminded me about the freedom being stupid affords you. How I'd often just go fly around space and watch things until I exploded. I wasted so many ships back then to just dumb luck and trial and error. But it was fun. And I didn't care.

My advice has always been to embrace your stupid. Don't be ashamed of it, or afraid of it. Embrace it. Learn from it and try not to be stupid the same way twice.

Stupid is just another word for daring, adventure, boldness, and awesome... gone wrong.

Was it dumb to fit a cloak to a Drake? Oh god yes.

Was it stupid to fit T1 Cruise missiles to a Drake? Are you kidding me?

But I lived. And I killed a Sac with it.

So you tell me. Funny, over 2,500 kills later and I can still remember the details of that engagement from five years ago.