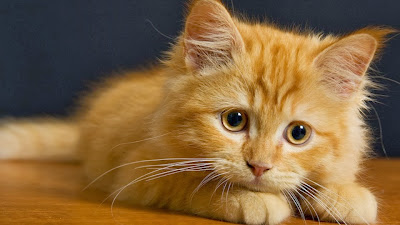 Whenever you start to work up enough internal hubris to start mildly suggesting the merest mention to yourself that, y'know, you might not totally suck balls at this thing you've been working at for over five years now - your cat kills you!

Oh, and then? It just keeps getting worse. Oh yes, the cat thing (which I will explain momentarily) was just the beginning of a two week long stretch of stupid.

It all started innocently enough. I jumped into a Breacher and a Condor in a plex with my trusty, slightly loot blinged Dramiel. Y'know, the same ship I kill vast amounts of people with on a regular basis. Well, regular as in not recently, but before when I used to fly it more often. But a Breacher and a Condor? Should be a good fight. And it was. I knew it'd most likely go down to the wire and it did. The Breacher died and the Condor had done the right thing by pulling range. At the exact moment the Breacher exploded my cat Vinnie jumped perfectly up from the floor directly onto my keyboard and mouse! A few moments of extreme panic later, in which I was not doing anything helpful with my Dram, and I go boom.

Vinnie has not been getting his bedtime treats.

I'm convinced he cursed me. So last night I started giving him his goddamn treats again. Because since the "incident" I've lost 12 ships. Some due to my own foolishness, but a handful of others in bizarre and unusual ways that defy easy explanation.

For example, yesterday I was out and about in a Stabber. I haven't flown Stabbers very often, having generally skipped right over them for the Vagabond and SFI, so I figured why not? Oh foolish mortal. I roamed all over town but nothing was about, so I returned to Hev to dock up. Which is when the gang of frigates entered system. I waited and sure enough there was an Incursus on the Jove gate, all alone. I warped down and waited to see what he'd do. He yellow boxed me and I returned the favor.

Now this is where it gets weird. For some reason my Stabber, who had been sitting in my hanger for too long apparently, decided my passive attitude just wouldn't do. And without my knowledge it not only yellow-boxed the enemy, it also decided to point him, web him, TD him, and then sit there without allowing me to activate my guns. I imagine my eyes must have bugged out of my head in shock. I am mashing buttons like a madman to no avail. I go boom.

I jumped a Maulus in to the enemy first, instead of third. I attacked three ships in my Hawk. I totally derped a gang in my Firetail. And I generally did some extremely foolish things.

It hasn't been all bad of course. And October has seen its share of good fights.

Which is the entire point. This is typical Eve. If you are out and about, looking for fights, you will find them. And sometimes the fights you find will not go your way. Sometimes they won't even go. Your computer will freeze, or lag on you ( I killed a Venture last week while my screen was totally frozen, all I could do was push buttons and hope!), it happens.

It is challenging to keep your head in it. It is insanely difficult to be on your toes at all times. It is a horribly complicated and evil game.

Which is why I continue to love every minute of it. Except when my cat kills me.