Why I HateLoatheAbhor the place called Jita 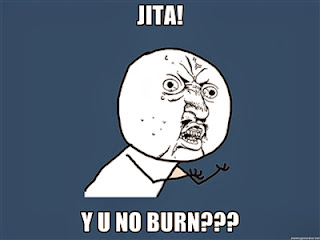 I remember the first time I visited Denver. The airport is pretty far outside of the city and I had plenty of time to think on the ride into town. For those of you that have not had this opportunity, or live outside the US - let me paint a quick mental picture for you.

There is no river, or lake, or obvious natural reason for Denver to exist at the exact spot in which it sits. It could easily be a hundred miles, or hundred feet, somewhere else. And it struck me, riding into the city, exactly how this happened.

Denver was settled by lazy people.

No insult intended to those living there now. But your ancestors, having trudged across disease and native american infested flatlands for months and months, took one look at the Rocky Mountains and said - Fuck that. And pitched a tent.

There are 5,000 systems in New Eden. And all the lazy people have settled into one of them. We call this place Jita. "Jita" means Wal-Mart in the native tongue. Y'know, if you had to get thru hundreds of thieves, pickpockets, and scum in order to get inside to actually shop.

I try never to go there because it depresses me. It sucks the life out of my experience, my game, and any enjoyment or hope I have stored up inside me for the future of New Eden. Unlike Denver, I fully intend any insults that residents of Jita may feel towards what I am about to say.

But, despite my intentions, every so often I am forced to waste an entire day of gaming to trudge my alt up to Jita to buy supplies. And that's what I did yesterday. I was in a good mood, until I landed in system and docked up for four hours.

Everything about Jita flies in the face of everything I enjoy about Eve. It is artificial. It is obvious. It is vulgar, but not in a fun way. It breaks the barrier. And above all it is horribly, disgustingly lazy. It is lazy because it is the ONE true trade center in all of New Eden. It is lazy because of the swarm of lazy ass opportunists sitting outside just waiting around for some idiot to undock. It is lazy, because it is infused with the spirit of quit. Give up. Far enough. Can't. Why bother?

For those of us pounding away in the hinter-lands, Jita represents the worst of shiny, boring, settled, "civilized" opulence. It was even worse this week because I had just spent two days in Null Sec space, reporting on "one in local", or "plus 2" in local. It amplifies the effect of constant 12, 24, 7, 18, 36, 2, empty, empty, empty - when suddenly there are 2,000 in local.

My blood boils and I just want to yell at everyone, "For goodness sake!! Split up!! There is a huge universe out there!!" and bash some heads in until someone agrees with me. But I don't of course, cause for all its faults, Jita sure is convenient.

I feel the same way about Wal-Mart. I try to avoid it, it makes me feel terrible, it sucks the life right out of me, but sometimes I really can't justify paying 20% more for something I really need across town. And I pinch my nose and plunge into it. All in the name of savings.

I don't feel good about myself when that happens. I need a shower afterwards. I'm left with a vague feeling that Wal-Mart is destroying the universe. And that there is nothing I can do to stop it.

And then I go home and tell myself that I probably, most likely, won't ever have to do that again.

Maybe I can stretch these supplies out further this time?