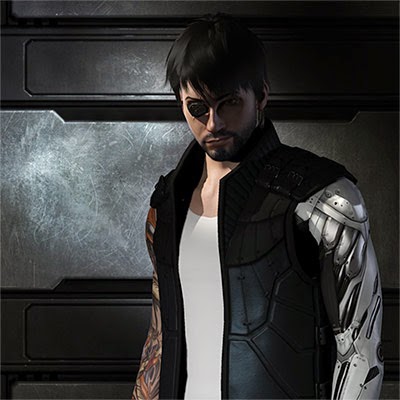 This post features Argos Gelert, a member of Giant Flaming Isopods of Screaming Temporal DOOM [ISOPD] and a member of A Band Apart for over three months now. He also has a robot arm.

I first started a little over a year ago.  I had been interested in playing since I first heard about the game years ago, but for one reason or another I'd just never gotten around to it.  Real Life and all that.  Once I finally subbed the game, I was sucked into the typical HighSec Mining Corporation after awhile.  Though it ultimately wasn't my cup of tea for quite a few reasons, it was still a good learning experience and I definitely made friends there.  After quickly getting bored with the mining life I started going into low and trying my hand at solo PvP.  I got in trouble for being a part-time, semi-successful PvPer (why are you going into LowSec?!?!?-ignoring that I was 7-1 in the space of time I was getting yelled at for lol), so I finally split and joined a more PvP oriented Corps. which was headed by a member of my former first Corps. that wanted to do more PvP himself.  Unfortunately that folded a few months afterwards due to those guys getting Bittervet Syndrome, and that's when a few of my original EvE friends along with myself formed the 'Giant Flaming Isopods of Screaming Temporal DOOM'.  Yes, it's a long name lolol and there is a backstory to it.  Hit me up if you want to hear it.

Through Rixx's Blog EVEOGANDA.  I'd followed it for awhile, joined the Pub Channel and talked to both Rixx and Joffy numerous times, along with others as well.  I donated a Prize during the Stay Frosty FFA, and helped Joffy with an 'Astero problem' he had as well lol.  Joffy kept trying to get me to join Stay Frosty, but I just couldn't pull the trigger and live in LowSec permanently-I prefer to dip in and out as the mood suits me.  Finally the Isopods just up and joined ABA, and we've been there ever since.

It's great that the men and women of A Band Apart are as consistently chill as I always knew that they were.  There is no pressure on anyone to do anything in particular, and we are all free to play EvE in a manner in which makes it fun for each individual player with no judgement on anyone's play-style.

To undock more often, not worry about losses nearly as much, and just go for it because honestly, why not.

Do what you want to do in EvE, and don't let yourself get discouraged by people that tell you that you are 'Doing it Wrong'.  I'm a firm believer that the only way you 'Lose' at EvE is if you aren't having fun, and to that point I do not believe there is anyway to 'Do it Wrong' in EvE.  I may not agree with your play-style or personally support it, but if you are having fun, then you are doing EvE 'Right', at least for yourself.

Well, even though my Corps. pointedly has no specific goals, it would be fairly interesting to grow a little bit larger than we currently are.  We don't really care about growing though, so I doubt that will really happen, and we are far too lazy right now to actively try to do it lol.  It doesn't help that since we have no goals other than to play EvE however we feel like playing it at that exact moment we don't exactly have a Recruiting Line we can use on people.  After all, what we feel like doing now might change drastically in 2 minutes, let alone in 2 days.

One day a good number of months ago, I saw a Cruor in a plex.  I figured hey, I'm scram-kite fit, if I can catch him I can hover around 8km out and I should have a chance at easily killing this guy, right?  WRONG.  I'd forgotten the Cruors current (and soon to be changed) web effectiveness bonus.  In moments he's got me in brawly range and I'm neuted, my cap is gone, my guns are off and my Hobs aren't doing enough to take him down quickly enough.  I'm spamming my AAR and I somehow manage to get a few reps off in between his neut cycles, but he's still tanking me easily, I'm in structure on fire, and I know I'm about to die.  Then... nothing.  His guns shut off.  I start pulling range.  My rails start hitting him, his ship starts dipping down to low armor, then structure, then *pop*, he dies and my Hobs rejoice.  I have 27 structure left at the end of the fight, though my armor has repped up nicely.  What happened?  That's right, he forgot to turn off his neuts and he capped himself out.  He lost his mostly Faction Fit Cruor in a 1v1 to a T1 Frigate that he should have easily been able to kill.  He was a good sport though and we exchanged GFs, as after all, everything that had just happened in those few brief moments?  Well, that's just EvE.

His Blog, his Artwork, and above all else his Favorite Hockey Team XD
(EDITOR: Go Penguins!!)


If you are interested in playing Eve with the nut jobs in A Band Apart, please join our in-game channels EVEOGANDA and/or The Frosty Hammer to talk to us about how much fun we are having!