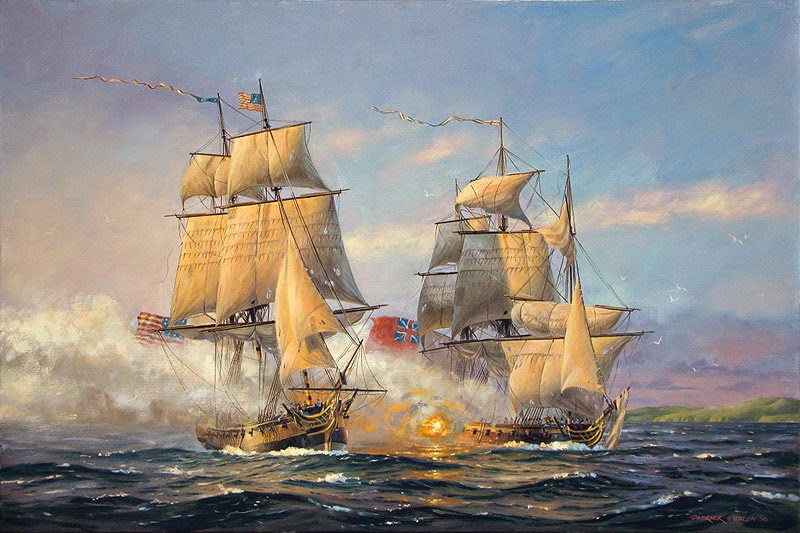 John Paul Jones found himself in a bit of trouble on September 23rd, 1779. His ship, the Bon Homme Richard, was losing a fight with the British ship Serapis. And by losing I mean it was sinking, the decks were awash in blood, and it was on fire. Oh, and half his crew was already dead. More were wounded. The fight was over. Seriously.

So the British Captain Pearson yelled over, "Dude, seriously? You should surrender." I've always loved this moment in time. I imagine the sheer chaos, the noise, the clatter, the smell, the sinking ship... and Mr. Jones standing there letting the British Captain's words wash over him. He could have said anything at that point. Certainly surrender was the smart move. But instead, he looked around at his men, and he yelled back, "I have not yet begun to fight!"

And these were not just brave words. He actually meant it. He rammed his ship right smack into the Serapis, had his sharpshooters clear the decks, and then they all jumped over there and kicked some serious ass. Like Pirates! Not like Sailors. They took over the British ship and sailed her to Amsterdam, the local drug-dealers called him "The Terror of the English"

Dude had some serious balls.

So the other day I find out that another Pirate group that happens to also reside in our System is going to War Dec us. I understand the need of these little groups to prove themselves, to gain some public relations, to poke the tiger on social media, and try to make a name for themselves by going up against us. I get it. But like Captain Pearson in the story above, they are making some pretty tragic mistakes. A Band Apart is not the big British juggernaut in the story - we are the Americans.

First of all, the entire idea of one Pirate group declaring war on another one is tusker level ludicrous. Even worse than that. When the tuskers declared War on us we were just a Corporation of maybe one-hundred pilots. But at least they had some cause for station-camping. (As dumb as those reasons turned out to be) In this case the 'reason' is even more ludicrous. Apparently having free-reign to shoot Stay Frosty pilots isn't good enough, the other guys want to be able to shoot our young/newb/non-combat pilots as well. They've clearly stated this as the reason they've declared war.

Ok, I guess I get that. I mean, if you can't beat them the normal way - what else is left? We did just publicly add an entire Corporation of young players to our Alliance. I suppose that is just too tempting for some people. Sorta like a wooden ship full of War Newbs?

So fine. Wars are not Stay Frosty's play-style and ABA is spread out all over the map, but our players are more than willing to come home for a few weeks and have some fun. And it'll be great experience for a lot of our people who may not have had a chance at this before. Already some good lessons are being taught.

I personally think it is silly. But that doesn't mean we won't. I'm sure John Paul would have rather have been doing something else on September 23rd. Maybe he had a hot wife back home, or fields to plant, or goodness knows what. But that didn't mean he couldn't take some time to smack down an arrogant British Captain.

I'm not bothering to respond much on Social Media, and I won't be writing about it much here on the blog. I'll leave that to other members of ABA if they want.

I'd much rather be catching Caracal Navy Issues with my Tristan. But if its War you want then it is War you'll get.

We have not yet begun to fight.

And we all know how that turned out.