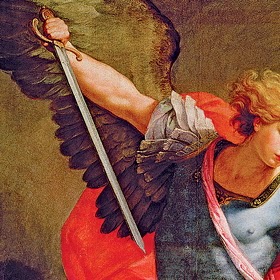 “The thoughts of worldly men are for ever regulated by a moral law of gravitation, which, like the physical one, holds them down to earth. The bright glory of day, and the silent wonders of a starlit night, appeal to their minds in vain. There are no signs in the sun, or in the moon, or in the stars, for their reading. They are like some wise men, who, learning to know each planet by its Latin name, have quite forgotten such small heavenly constellations as Charity, Forbearance, Universal Love, and Mercy, although they shine by night and day so brightly that the blind may see them; and who, looking upward at the spangled sky, see nothing there but the reflection of their own great wisdom and book-learning…

It is curious to imagine these people of the world, busy in thought, turning their eyes towards the countless spheres that shine above us, and making them reflect the only images their minds contain…So do the shadows of our own desires stand between us and our better angels, and thus their brightness is eclipsed."

Lincoln is trying to write his first Inaugural address to the nation, an important speech if he is to save the nation. He shows the draft he has been working on to William Seward the Secretary of State. Seward recommends that Lincoln try to end the speech a bit more conciliatory and he sketches out a few suggestions. We know all of this because these back and forth draft notes between the two men still exist. Seward's notes include the words, "better angels", which he most likely remembered from the Dickens excerpt above.

This week I opened the doors to two brave writers who expanded upon some themes that I brought up earlier in the week. I strongly believe these are important issues that should be debated, discussed, and argued in public. I also know that there are no sides to these issues, there cannot be. Anger and hate do not have a side. There is no argument for them. Just as there is no valid stance for Evil. Expedience and convenience are not valid arguments for doing wrong, they never have been. Evil often hides behind rationalization and crowd mentalities to perpetrate vileness, but the acts themselves remain vile.

Inside of Eve I am a Pirate. Every day I hunt my prey. I have, at one time or another, fully exploited the game mechanics for my own personal gain. I do so as often as I can. I prey upon the weak, the young, the old, the veteran, the experienced, I hunt them all. Inside of Eve I show no prejudice when it comes to my own play-style. Everyone in space is equal. This is how I choose to play the game. As a game. As a game Eve is morally ambiguous. By their very nature most games are. We are, after all, talking about digital representations of light. Flickers of numbers bouncing against our retinas. Their is no right and wrong there, only light and dark.

And yet, there are people on the other side of each of those screens. People whose eyes reflect the self-same pixels as do mine. People from all walks of life, social, economic, political, racial and yes, even gender backgrounds. And, like with anything, once we add people to the mix - things get complicated.

I think back to that moment when Lincoln was desperately trying to find the words to save the nation. By 1861 everyone with any intelligence knew that Slavery was doomed. The rest of the world was already moving towards this, or would soon enough. Those in the South knew this as well. Lincoln's call toward their "better angels" would go unheeded and shortly America would fight the only war ever needed to bring about the end of Slavery. A horribly costly and useless war, whose echoes continue even today. The worst part about the American Civil War has to be its pointlessness. And its waste.

This is how I look at it. I am no Saint. I have never claimed to be. I enjoy a good Troll. I enjoy a good laugh. I really enjoy playing Eve. And, at times, I will call those people out that deserve to be called out - within the context of that world. For me, it has never been personal. It has never once been about the person on the other side of the screen. And that is where I have always drawn the line. It seems a fairly reasonable point of demarcation. Man, woman, child - whoever is on the other side - is a person. A person I most likely do not know. A person with their own lives, their own challenges, hardships, expectations, baggage, and rights. Just as any other person, in any other context.

Because Eve is full of people, Eve is full of the same problems as the rest of the world. In the greater context, it is no worse or no better than any other system in which people interact. Because it is a system in which people interact. Within that system there is room enough for all of us to co-exist and thrive together or apart. For various opinions, outlooks, and social norms to flourish, thrive, and wither away. Eve is only a reflection of the world in which it exists. And that world is the one we all must live in. Together.

Personally I feel, as I did earlier this week, that a paradigm has shifted. And perhaps that is only because my own world inside Eve has. I freely admit this may be the case. I may be clouded by my own perceptions. I often am. As we all are. But I would like to think that more and more of us are striving toward our better Angels. One has to believe this, doesn't one? If you don't, then what is left to you?

I think it is amazing that excerpt from Dickens has so much to do with the Stars in the night sky. That he felt, as so many of us have, inspired by the vastness of space. It is that longing, that poetry, that desire that we all share. The spirit of adventure, the challenge of the unknown, the face of the creator - that brought us all to Eve in the first place. That sense of wonder. Why else are we all playing a game about spaceships? We could be doing anything.

And maybe, just maybe, this is what we should all keep in mind. We do have something in common after all. We share something that unites us, no matter where we come from, what we've been thru, who we are, we all share one thing in common above all else.

We all play Eve.

And maybe, just maybe, if we start there the rest won't seem so hard. I believe that.