Svipul: A Life in Pictures

on February 11, 2015
In the Summer of 1917 Nikola Tesla made perhaps his greatest, and most tragic, invention. An Autonomous Machine he dubbed S.V.I.P.U.L. (Sentient Voltaic Inclined Propulsive Unit Long-lasting).

While Tesla was away however, Edison's Goon Squad destroyed the laboratory and put to fire all of the documentation and plans for Tesla's genius. It was rumored in the days following that SVIPUL had managed to escape on its own - but no one even believed in a SVIPUL in the first place. Obviously Tesla was insane. Edison said so.

Reports began to surface later that year of a mechanical man working with the Americans in the trenches in France. Such reports were cast aside as the ravings of soldiers suffering from Shell Shock and no one truly believed them. So yesterday I spent hours pouring thru recently declassified government documents and managed to find a single grainy photo.

I believe. In fact, if one is willing to connect the threads, a complete picture starts to emerge. Svipul is real and living among us - much further back than modern historians are willing to believe. The proof is right there.

After the war it appears that Svipul wandered the globe before finally settling into a life in the United States. Documents from those days are hard to come by, but we are certain he worked and paid his own way. Even during the Great Depression, Svipul spent time on the Hoover Damn project.

There are countless other stories from these times that we could recount, and for a complete history please pick up my new book called: Svipul The Complete History from Amazon. It is chock full of delightful pictures, first-person accounts, and plenty of fabricated documentation.

It is however, Svipul's years in Hollywood that most people care about. Svipul had served as the inspiration for Fritz Lang's Metropolis, but the main role in the movie had gone to a female robot instead. It wasn't until the 1950's that he entered the public eye. His earliest role was in the television series Lost in Space.

While the role gave him some measure of fame, it proved to be a double-edged sword and Svipul found it difficult to find new work. He had been typecast. In the mid-70's George Lucas gave serious consideration to using him in Star Wars. 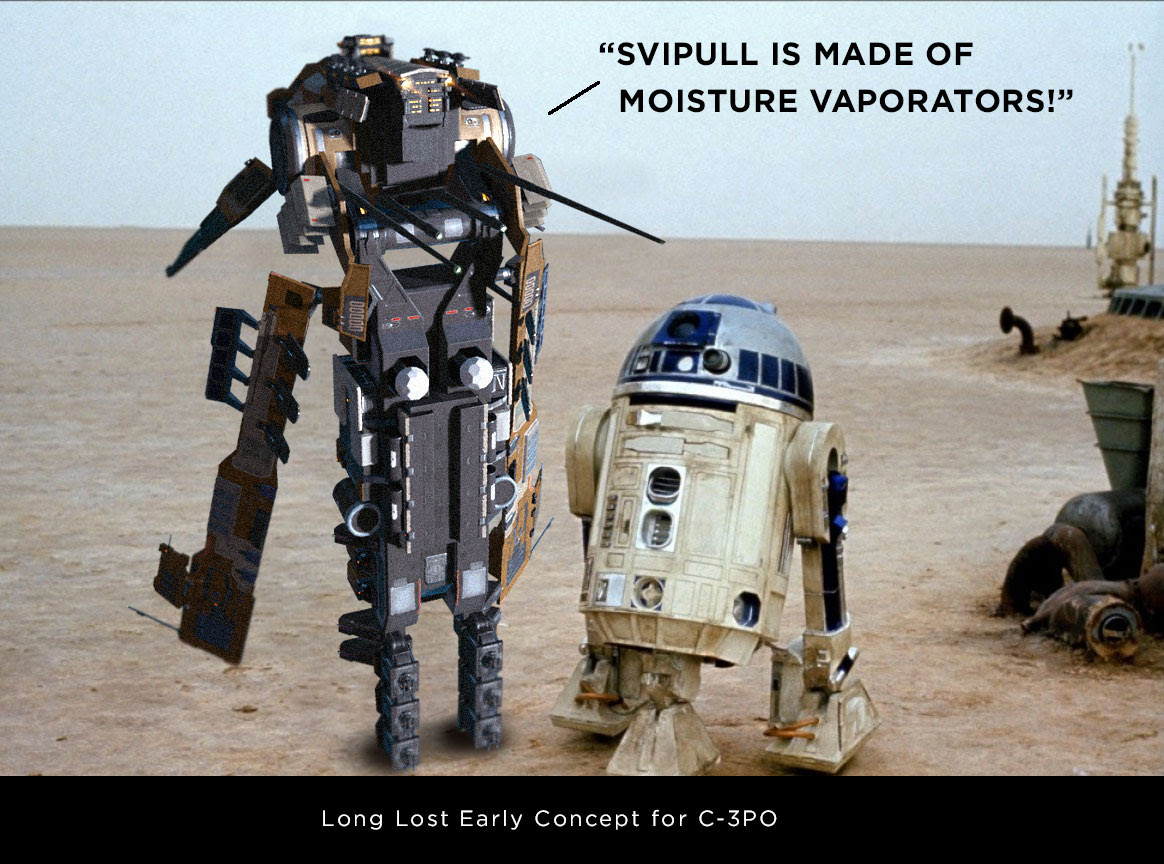 But Svipul proved difficult to work with on set and the part went to the Metropolis' Robot's Son C-3PO. Heartbroken Svipul took the only thing left to him, a Disney film called the Black Hole were he played the bad guy robot Maximilian.

And then Svipul got his biggest break to date. John Badham, whom Svipul had once pulled from a burning building in Los Angeles, decided to make a comedy based loosely on Svipul's life. A modern re-telling in the way that only 1980's cinema could do.

The movie bombed at the box-office. And while it would gain much love on VHS later, Svipul never saw a dime. These were dark years. Drugs. Homelessness. SiFi Conventions. Bottom of the barrel stuff. He made do with what he could, primarily as a guest on children's cartoon shows.

The generation that grew up on bad 80's science-fiction grew up and maintained a love for Svipul. Soon those "kids" were making movies of their own and Svipul started to gain more and more popularity. First getting cast in the semi-successful adaptation of Hitchhikers Guide to the Galaxy.

And then in Michael Bay's Transformers, reprising the role he had originally made famous in those cartoons from decades before.

Which brings us to today. As Svipul nears 100 years of life, possibly his biggest break is hitting the screen soon.

From all accounts this will be his masterpiece.

It is also worth noting that Svipul's design has been lovingly transformed into a ship design inside a computer game called "Eve Online". But that is certainly a minor note in such an amazing life as his.