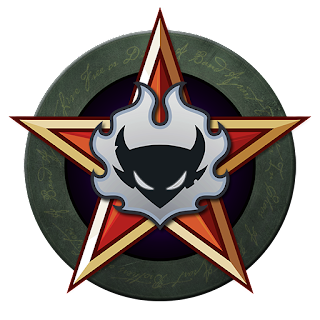 Finally, after more than a year, A Band Apart has an Alliance logo in-game. For some weird reason this update makes it all feel real. Hard to explain, but that default star always felt strange. Throughout the history of Eve building, expanding, and developing a working Alliance was always capped by the adoption of a brand. You needed to be around for six months, have a minimum amount of members, and qualify for the honor. It was the period on the end of a type of sentence.

I had to relegate the "Clash" logo to a non-official supporting role, it being based on the famous Clash album cover was enough of a connection to an intellectual property to cause consternation. So I decided to play off the logos I'd already created for Stay Frosty, Lucifer's Hammer and Supreme Mathematics to make this one. The words round the circle are supposed to be almost impossible to read, think Lord of the Rings style. But the words say, "A Band Apart Together in Chaos A Band Apart Brothers and Sisters A Band Apart Live Free or Die" Runes of protection I guess.

I'm happy with it and it looks great in-game. It'll look even better plastered on the side of my ships. Soon™

Yesterday on Slack I got into a conversation about celebrities. In my long career I've had the opportunity to work with quiet a few of them over the years. In addition, having traveled so much for business, I have often bumped into or had contact with them as well. There was a point in my life when I was going to New York or LA rather often, primarily for production or advertising work with clients, and that period was when a lot of these encounters happened.

Some of the encounters happened for business reasons, some introductions from friends, some random encounters and sometimes I just happened to be in the right place at the right time. Or the wrong one. As in the time I backed right into Roberto Benigni in Times Square. I had some time to kill before a color timing session and I wandered down to Times Square to grab a tourist gift for my son. I was standing on one of those concrete risers, my mind lost in thought when I backed right into him. We both stumbled, him more than me, and when I spun around I realized he was surrounded by cameras and press. This was right around the time of the Oscars. He was a good sport about it and we both laughed.

I've given thousands of presentations over the years but one of the more memorable ones had to be down in West Palm Beach Florida. It is a long and convoluted story, but essentially I was there to win a piece of business. As part of that I had agreed to be in a Celebrity Golf Tournament to raise money for charity. This remains the one and only time I have ever played Golf. Which is a funny story on its own. But the day before I had to give a presentation to the board of directors of a cable channel. The board included Evander Holyfield, Marlon Jackson, Cecil Fielder, and Robert Townsend among many others. During the presentation I noticed that Evander had fallen asleep and was snoring at the end of the long conference table. Everyone paused for a moment and I said something like, "With that ear of his, he probably can't hear us anyway." Thankfully everyone laughed and we won the business. Needless to say the next day's tournament was chock full of famous people and I even had the opportunity to shake hands with and speak to Jesse Jackson.

I once gave a presentation in the basement of a hunting lodge with Elk bleeding all over the floor, so I've been in some weird situations. That one was to Matt Williams and David Dellucci for a television show we were producing. The show was actually picked up by the Outdoor Channel before all the involved partners had a huge falling out.

I'll save more stories for another time. I have never once had a negative encounter with a celebrity, famous or otherwise. It helps that most of my encounters happened to be professional ones. I'm not enamored by fame and I never ask for autographs and rarely get pictures taken with them. They are all people just like us, putting their pants on one leg at a time. I admit to geeking out more when I meet people that I admire, like Harlan Ellison, or Neil Degrasse Tyson, or Sally Ride, or John Byrne, or Terry Austin. Or that time I was handed an award from R. Lee Ermey, now that was pretty awesome.

I really need to write a book.