on June 02, 2015
I have always been the first person to own up to my own mistakes. I'm not shy about taking chances, making things happen and owning risk. With that comes a responsibility to own those moments when you make a boo-boo. When they rarely happen :)

Anyway. Yesterday, while I was playing Eve, this image was posted along with several other members of Tweetfleet saying it looked surprisingly familiar: 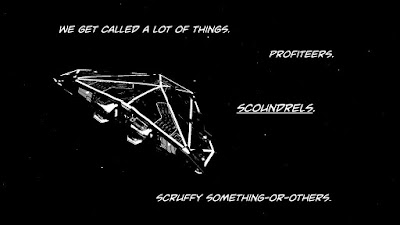 It does look surprisingly familiar in this context. In fact, it looks like a rather blatant rip-off of my long-running 1v1 Eve Comic series. And here is where the mistake happened. Instead of immediately looking into this more deeply, I responded immediately. And I should know better.

While the posted image makes it look like a single panel comic, it isn't. It is in fact a web comic story-line based effort. You can see the work here. I don't play Elite Dangerous so I can't really comment on the story-line, but the artist responsible doesn't draw his spaceships like I do and they share very little in common. So no harm, no foul.

My advocacy of creator rights goes all the way back to the early eighties and the struggles of comic book creators to own their own creations. So I've spent my entire career in defense of my own rights and those of other creators. I've been ripped off many, many times. Sometimes blatantly, more often in indirect or in homage ways. It comes with the territory. Four times in thirty years those actions resulted in legal action, all of which I won. The fifth one, while it doesn't involve actual work, is still working its way thru the legal system. If you are interested you can read about that case on Adweek. I'm quoted in the article. That thief walked away with $25,000 of my agencies money.

Even if the Elite comic had been a blatant rip-off, there isn't anything I could do about it. I certainly don't own the rights to my own work here on Eveoganda. Nor did I create the idea of a single panel comic drawn on a black background, I'm sure someone has done it before. It still would have been a rotten thing to do and worthy of attention, but let's face it - not a big deal in the grand scheme of things.