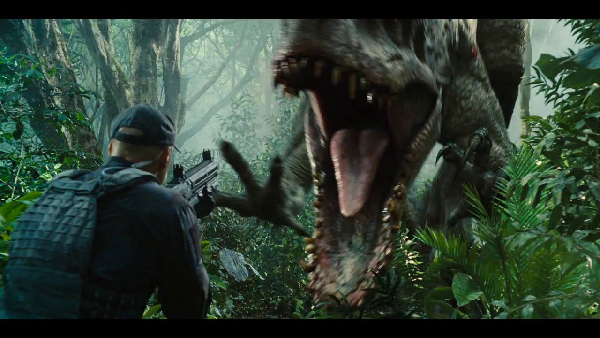 It struck me yesterday as I was enjoying the new Jurassic World movie (which is a lot of stupid fun, nothing great but enjoyable despite its predictable plot and rather tame violence) just how much Isla Nubar reminds me of New Eden. Bear with me here and even if you haven't seen the film I think you'll get the analogy.

Jurassic World is a self-contained island being run by a Corporation called Ingen. The park concept, originally conceived by John Hammond in the original movie Jurassic Park, is now up and running. Has been for awhile now. On this island you have a dozen or more Dinosaur species living in various stages of security, among a large throng of extreme high security. The dangerous need to be kept away from the tourists. Sound familiar?

I don't think I'm stretching things to say that Jurassic World sounds a lot like New Eden. The tourists mix with Dinosaurs in variously decreasing security zones, from petting zoos, to water park attractions, glass log tubes, and glass bubble cars that zip about in protected fields among certain types of "safe" Dinosaurs. The more dangerous the Dino the more security you need. In case, you know, they get out of their zone and eat you.

As we all know from Ian Malcolm this kind of system is going to break eventually. You just can't keep the nefarious elements away forever. Despite all the safety systems in place to protect everyone from each other, it is only a matter of time before the inhabitants have a chance to meet one another and have some fun together. Or get eaten. Or just run away in fear. Or leave. Depending on your own personal choice I guess.

I found it interesting that Ingen thinks Dinosaurs are not enough anymore. Despite good attendance figures they feel the need to go even bigger. So they engineer a massive new attraction that is part Rex, part Raptor and a bunch of other stuff that results in the creature being able to hide its body temperature and cloak up. (Although it only really uses the cloaking ability once!) And this new attraction is all the more evil because it only kills for "the sport" and not because it needs to feed. That's horrible. (cough cough)

So, once it escapes Ingen sends Concord out to deal with it and put it back in its cage. A cage that was its only home, where it grew up in isolation. God only knows what kind of screwed up thoughts it must have about how the rest of the Island works! Poor creature. Funny, in order to escape its pen the new Dino even pulls a New Eden-esque hack job, tricking the captors into letting it go. I was reminded of all the ways in which Eve players have found work-arounds to CCP rules over the years.

Obviously the new Dinosaur is totally OP. It can't be killed by mere bullets, nets, tranquilizer darts, or .50 caliber Helicopter mounted machine guns. No Sir. Its tank is too big. The only way to teach this bad boy who is Boss is by ganking it with a blob. I won't spoil the film for you, but the ending is pretty bad ass.

High Sec is saved. But the fallout will have consequences.

You can't blame the Dinosaurs. They are only doing what they do. Life will find a way y'know. And you can't really blame the tourists. I mean sure, they came to the Island to see Dinosaurs. And sure, their whining about it being boring now is why Ingen felt forced to invent an even bigger, nastier Dinosaur in the first place. And you'd think they'd be happy once the Dinosaurs are out of their cages and mingling with them. Up close and personal. But they aren't. You just can't please some people.

So now the theme park is ruined and the Island belongs to the Pirates Dinosaurs.