If it ain't Bloat

Yesterday's post asked a lot of questions, about where Eve has been and where Eve is heading. The core question was relatively simple - is Eve becoming bloated with features, options, and content?  Especially in light of recent indications that subscription numbers may be trending in the wrong direction, this is an important question.

My answer is also simple, I don't believe "bloat" is the issue. While I think that some areas within Eve have not received the proper attention, and some areas have been added that frankly we probably didn't need, in general I don't believe that "bloat" is the issue. Eve is an entire universe, a gargantuan sandbox in which any player (young or old) controls their own destiny and (within reason) can choose their own adventure. As such, it relies heavily on vast and varied options. These options can often seem like bloat, especially to those of us who have explored them and landed on one or two directions for ourselves.

I don't think the answer is simple. In fact I think it is rather complex, historical, and layered within the persona that Eve has built around itself for the past decade. When Eve was born the idea of an open-ended, harsh, unforgiving science-fiction universe was an incredible accomplishment. One worthy of high-praise, attention and trial. Heck, the mere fact that another MMO was available at the time was probably enough to get most interested players to give it a try. Over the years Eve has planted its flag firmly in the HTFU camp of games. A cold, distant, unforgiving place in which a player is left almost entirely on their own. It is the pure definition of "sink or swim". Throw yourself into the water and let's see what happens.

(Man that sounds a lot like Iceland, doesn't it? That is not a coincidence.)

And while there are players (like myself) that love Eve for this, sadly the vast majority of potential players do not. And while I would never suggest that Eve start holding hands and singing warm campfire songs, it does seem likely that some things need to adapt to the world we find ourselves in now. This is no longer the early days. The world is different now and Eve needs to adapt, ever so slightly, to the new world.

The New Player Experience needs a lot of help. My wife recently started playing Eve and I've been living her experience with her. It has been an eye-opening experience to say the least. And while the new "opportunity" system is an improvement, in general the Newbro experience leaves a lot on the table. I've written a lot about ways to fix this issue over the years because it has always been a concern. New players are our life-blood and we need to be doing a better job of helping them. I don't care if it "isn't Eve", new players need help and Eve is not doing a good enough job of helping them.

The New Player Experience, or lack of one, is hurting Eve. Which means it is hurting all of us. That needs to change and change fast.

More reward control needs to be given to leaders. Alliance executors and Corporation CEOs need a better and more comprehensive system of rewards for their players. Right now the only thing we have is an Award System that is frankly kinda dumb. In fact it can even be turned off. And while it would be nice to think that achieving things in Eve should be its own reward, it would be nice to give some actual rewards for actual achievement. People like to feel good about what they are doing and Eve makes it almost impossible to recognize that. A sense of achievement helps everyone. This is an area of Eve that I believe needs a serious looking into, some development, and some significant options made available. I would argue that Eve itself needs to have a way to recognize something that has happened in-game on an individual level. I don't think this is asking for a lot.

Bring belt based NPCs back across New Eden. This is especially helpful for younger players, but it would also increase content across the board for everyone. Asteroid belts, in most of New Eden, are empty wastelands serving very little purpose. Watching my own wife struggle to make a decent living belt ratting has really opened my eyes to this issue and its implications across the entire map. Again, yet another small change that would have tremendous impact across the game. For everyone.

I could go on. The point being that once you take a moment and start thinking about Eve as an incubator for growing dedicated and long-term players, instead of an unforgiving and harsh world that leaves you entirely on your own - the ideas start. One could look at every system in Eve, from Industry to PvP and beyond, and see potential improvements. And the best news is, aside from the New Player Experience, most of these changes are pretty simple and easy to implement.

And then we can talk about other ways to build the player-base. About opening doors and creating public spaces, about colorful ships, customizable content, player controlled development, aliens, exploration, and remaking the image of Eve and building a brand that is welcoming to new players, interesting to old ones, and captivating enough to survive another couple of decades.

And isn't that something worth a little time and effort? 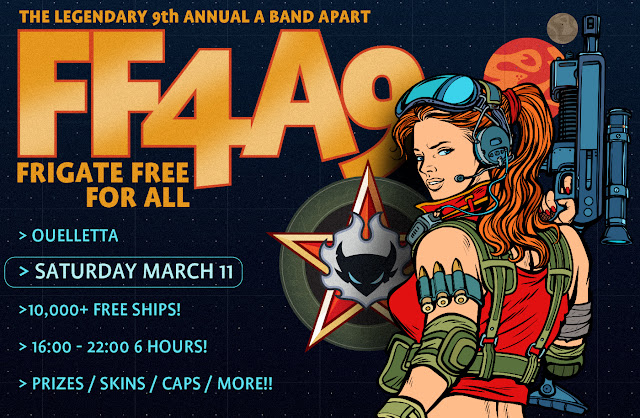 On Saturday March 11th between the Eve times of 16:00 and 22:00 Stay Frosty and A Band Apart will be hosting our 9th Annual Frigate Free 4 All event in Ouelletta!  Last year's event broke all the records we set the year before and we anticipate this year's event will be even bigger and break last year's records. With well over 10,000 fully fitted frigates on hand to be handed out and lots of special events planned, this year will rock and YOU are invited. This day is for anyone to attend, no matter your skill level or what you do in-game, come to Ouelletta, dock up, and grab a ship. Experience the thrill of frigate PvP and register that first kill in space. Or jump onto a Capital kill for the first time! Or simply perfect your skill and watch those zKill stats rocket! Whatever reason, this will be the place to be. So how does this work? Ouelletta has three NPC stations and each one is going to be cram packed with thousands of frigates and destroyers already fitted for you