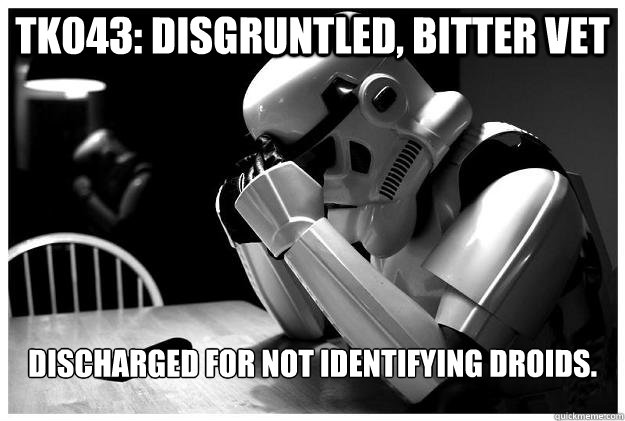 Obi-Wan said it best, "You have to let go of your bitter and use your feels, Luke." To paraphrase the great Jedi manipulator of innocent third-class young natives in his bloody quest for personal revenge over the deaths of hundreds of young Jedi, not to mention his own teacher and the loss of billions of poor Alderanians, all of whom he was sworn to protect and yet managed to fail miserably to do so. But I digress.

Yesterday's post about the negativity that festers in the heart of Eve garnered a lot of attention. Tonight I'll be a guest on a Podcast along with others to discuss the subject even more. Which should be a lot of fun, I'm looking forward to it.

We are in un-chartered territory here. Eve is plunging into a new path every day that hasn't been worn down by anyone else. A single-shard shared universe that has been chugging along for a dozen years doesn't come along every day. There are no signposts along the way to judge, reflect, or consider. This is a bold journey that CCP and its players are taking together. Back in 2003 the Iraq War was just getting started and the Space Shuttle Columbia exploded on re-entry. This universe of ours has been chugging along ever since and no one knows how long it will continue.

We can all look for analogies in other industries, we can post the subscription or log-in numbers, we can endlessly speculate, debate, deride, argue, blame, point fingers - but what are we trying to accomplish? As fans and players of Eve Online what is our goal? Obviously that goal is different for all of us, that is after all, the wonderful nature of a "community". A community that is united in a singular goal is called a team, and we are not a team. I wouldn't want to be on a team with some of you. And I'm sure you feel the same way about me. So let's stick with community.

Most games from 2003 won't even play on your machine. How many games from twelve years ago are you still playing regularly? There isn't much else like Eve. And there isn't another company of people like CCP either. (God bless them one and all.) I can't begin to imagine having to deal with a planet's worth of players each and every day. Balancing game play with the demands of a fan base ravenous for blood. I salute the devs and the artists and the managers and the multitude that keeps this universe chugging along every day.

So we ask ourselves then, what is our goal? When I think back I have to consider the fact that much of my own goals and those of our community have been accomplished. Think about this with me for a moment. There was a time when we didn't have a representative group of players that worked directly with CCP. We do now. And whatever you think of the CSM, and opinions vary year to year, you cannot deny the fact that they exist. That is an amazing accomplishment. You also cannot deny that Eve works better now than it ever has before. Or that it looks better now. Or that we have more spaceships. More options. More cool toys. More awesome modules. We have ships that move, that transform, that do things we could only have dreamed about a few short years ago. We have the very beginnings of occupancy based Sov, and while I think we can all agree it has a ways to go yet, it is off to a great start. Soon we will have our own structures, the problems inherent in the POS will be addressed in new and interesting ways. And we've had hints about building our own Gates and potentially exploring new and uncharted lands. We have NPCs that can almost think for themselves! Whew.

That's a lot. And that isn't even a comprehensive list.

Thing is, I would never in a million years try to tell anyone how to respond to all of that. I respect every individual's right to decide for themselves. All I can tell you is how I respond and what I think. Everyone has to come to their own decisions. Play Eve for a few months, a few years, a decade, or longer, it is up to you to decide. There are plenty of other things to be doing, many (if not most) are more important than internet spaceships. The thing I can tell you is the effect that lingering bitterness has on the community and the long-term prospects of the very game that I enjoy. And this I know for a fact.

It has a negative effect. That is a fact. Negativity breeds negativity. Today it is easier than ever to see this happening all around us, the speed, convenience and instant gratification of negativity is showcased daily around the world on our computer screens. And Eve is no different. The hives of negativity might change from one world to the next, but Eve certainly has its fair share of them.

So that ball of anger threatens the game I enjoy. It hurts the community I am a part of. And so, naturally, I don't like it. Whenever I get dragged into it I feel despair honestly. And despair is the enemy of enjoyment. I'd rather that ball roll on somewhere else. I'd much rather have good honest debate about real issues, than hurl insults at each other. I'd much rather stand together to improve this amazing game of ours, than fight amongst ourselves. Wouldn't you?

Let go of your bitter. Take a break for a moment. Go outside and breath deep. You are alive and that is a gift you will not always have. The internet spaceships will be here when you get back.

The old saying says, you reap what you sow. There really aren't many wiser words.

What are you sowing?