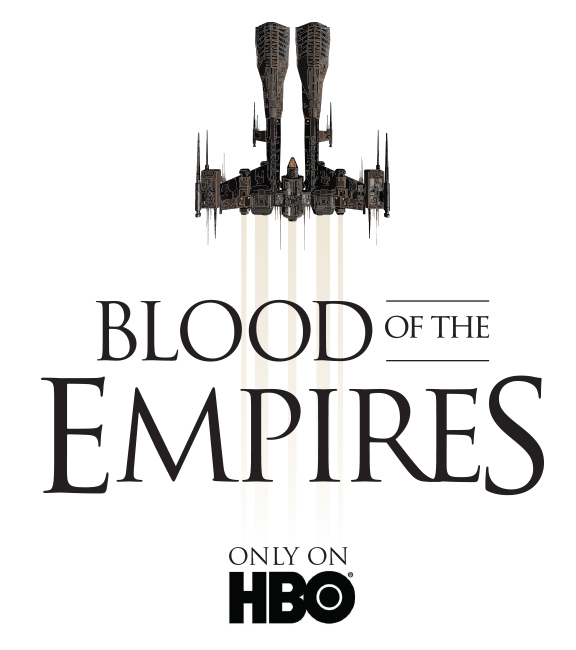 FOR IMMEDIATE RELEASE: HBO, in association with CCP Games and EVEOGANDA Films, is proud to announce the world premiere of BLOOD OF THE EMPIRES on September 21st, 2016 at 9 PM EST. Directed by showrunner Baltasar Kormakur (Everest), Blood of the Empires stars TOM HARDY (Mad Max), NICHOLAS CAGE (Leaving Las Vegas), JAVIER BARDEM (No Country For Old Men), DIANE KRUGER (Inglorious Basterds), and MORENA BACCARIN (Firefly) along with an entire universe of special guest stars, including SCARLETT JOHANSSON as the voice of Aura.

Set in the far future of a humanity trapped in another universe, Blood of the Empires is based on the legendary Massively Multi-Player global sensation EVE ONLINE. The series' compelling story is inspired by events created by the legion of Eve players and is set among a galaxy of imagination unlike anything ever brought to screen before. The series primarily follows the destiny of four characters from each of the universes major Empires as their paths lead to conflict and war that will change the face of the galaxy forever, and alter the path of humanity's future.

In an unprecedented move, Blood of the Empires is being written by an actual Eve player. Bryan K. Ward, known in the game as notorious Pirate Adventurer Rixx Javix, will be serving as head writer. The series marks his debut as a series writer, but Mr. Ward has also assembled a team of writing consultants including DAN SIMMONS, ERNEST CLINE and HARLAN ELLISON. "The primary goal is to tell a story about authentic characters and their personal struggles against an epic backdrop of politics, espionage, pirates, war and intrigue, all the things that make Eve Online so compelling," said Mr. Ward.

Blood of the Empires was filmed primarily on location in Iceland, the home of game creators CCP Games and of director Baltasar Kormakur. "Iceland is in the blood of Eve, the harsh reality of the island and its history, the fire, the chaos, it is all part of the darkness we needed to tell this grand tale," he recently told Vanity Fair. Additional location and stage work was also filmed in England and the Canary Islands.

Each episode of Blood of the Empires will also feature real Eve players who were lucky enough to be chosen thru an in-game lottery process. 4 lucky winners will be featured in each episode of the series.

But Eve is primarily about spaceships and the series will feature hundreds of the iconic vessels in stunning 5k 3D. In another ground-breaking first the series will be streamed live in 3D to Occulus Rift and PS4 Morpheus subscribers. "This was Mr. Ward's idea and I always tend to just go along with whatever he says frankly, the man is pure genius," said CCP Games CEO, Hilmar Veigar Petursson recently.

Blood of the Empires has already been renewed for another season.


UPDATE: Several early pieces of promotional art have been leaked.


The Truth: Ok I let this sucker run all day and now it is time to come clean. Almost nothing about the above is true. There is a potential Eve television series under development, but details are sparse. What we do know is that Ridley Scott's production company Scott Free has it and that Icelandic Director Baltasar Kormakur is attached. I must caution you however, Scott Free is notorious for having a lot of concepts under development that never see the light of day. If I listed all the projects rumored from the company over the past decade the list would be almost as long as Guillermo Del Toro's.

Of course I would love to be involved. Which isn't as big of a stretch as you might think. I have developed two television shows in my history, one of which was going to feature Bret Favre and the other one was actually picked up by the Outdoor Channel - before all the partners has a big fight and fled the scene. I was also in development on a reality tv series about a women custom motorcycle builder and once had a movie script almost green-lighted by MGM - right before they went into bankruptcy.

I picked Sept 21st because that is my Eve Anniversary. I thought the casting of Scarlett as the voice of Aura was a nice touch, given her role in the film Her as the voice of the operating system. The rest of it, right up until the quote from Hilmar, is legit ideas I've had previously about bringing Eve to the screen. And while this entire post was a boring Friday's attempt at humor, it doesn't mean the idea doesn't have merit. Which is what makes it ring so true I believe. It sounds really great.

I still believe Eve can work as both a series and as a film. I hope that those involved with whatever incarnation eventually sees the light of day feel as strongly as I do. I know they won't, which is where worry starts to creep in. Fingers crossed as always.