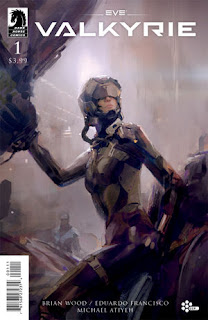 Superstar writer Brian Wood tells the origin of Rán, founder of the Valkyrie—the deadliest space-fighter pilots in the EVE universe!

This series leads into EVE: Valkyrie, one of the most hotly anticipated video games of all time, a groundbreaking virtual reality space-dogfighting shooter from the creators of EVE Online.


Earlier this week I was fortunate enough to receive an advanced copy of issue number one of the Dark Horse Eve: Valkyrie comic series for review. The issue hits the stands on October 14th and is the first issue in a planned mini-series that sets up the launch story for the Eve: Valkyrie video game.

This kind of convergence is right up my alley. As a video game enthusiast, former comic-book writer/artist, and Eve super fan, not to mention a fan of all things science-fiction - this book manages to hit all of my buttons. At the same time, given my long history with these genres, I also have to admit to some hesitation when it comes to tie-in products. To say they can often be a mixed bag is being kind to some of the more horrible examples that have been fostered on us in the past. 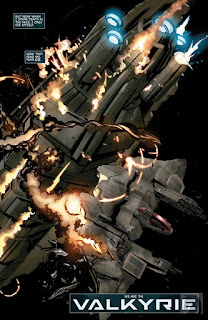 I need not have worried. The story of Ran as told here by Brian Wood and gorgeously illustrated by Eduardo Fransico is well told and compelling hero building. And while it might adhere a little to tightly to the hero's journey at times, the glimpses into real world life in the universe of New Eden makes it well worth the trip down that well-worn path. The tale behind why someone would choose the hard and dangerous path of becoming a pilot in a universe like Eve's can make for an interesting story, and Ran's journey here does not disappoint. I won't give away anything in this review, but her story manages to impart meaning and feeling into her choices - something that I found surprising and welcome.

Another challenge in stories like these is the depiction of space battles in static frames. Many artists over the years have approached this challenge with many different solutions, but I like the choices made here. Eduardo's art is clean and often graphically simple, but it compliments the story and adds clarity to what can often be a confusing and complicated environment. There are moments here that any player in Eve, or reader of science-fiction in general, will appreciate. 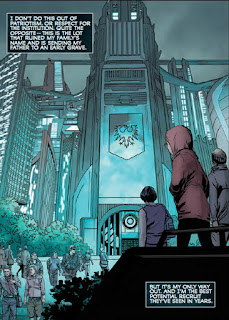 I also think the cover by Borkur Eirikssen is gorgeous and would make an awesome poster. Although the one for issue #3 looks even better.

It will be interesting to watch this story develop over the remaining issues. Right now it is hard to tell exactly how much more back-story there will be, or what the reveals might be down the road. The first issue certainly does a good job of setting the story up and giving the reader reasons to care. Ran is the central character, not only of this narrative, but of Valkyrie itself - so this is important groundwork.

I could wish for a bit more meat when it comes to the depiction of hardware environments, some of the art feels a tad rushed and minimal in places. But that is a small complaint. There are several moments that should give any Eve player a moment of recognition, and any potential Valkyrie player enough to satisfy their own curiosity.

I give Eve: Valkyrie 8.75/10 and I'll be sure to pick these issues up myself. Having played around with Valkyrie earlier this year in Iceland I couldn't be more excited to finally get my hands on the full game when it is released, so these issues help to fill the void until then.

You can pre-order issues 1-3 now over on TFAW.