After Hours with Rixx Javix 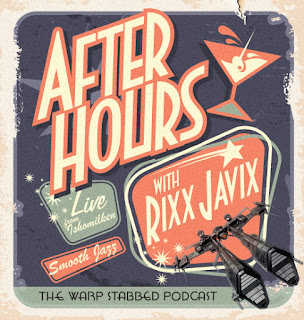 Eveoganda is coming up on its sixth year of serving the Eve community. And after 1,780 posts, countless pieces of art, comics, wallpapers, events, hats, cards, videos, and everything else that has happened during that time - it is time to try something different. A new challenge to keep the creative juices flowing. Originally my idea was to create a TV show called "Gate to Gate" and have some fun animating Rixx doing a talk show. But frankly that concept may have been waaaaay ahead of its time, and even though I think it is incredibly fun, no one else seemed to care one way or the other. Ker-plunk, it landed and went splat. I may return to it someday down the road.

This isn't the first time I've considered doing a podcast. I've floated the idea several times here in these pages over the past five years. But I always stopped short of doing it. For one thing, there are so many great podcasts already out there. For another it isn't a visual medium, which (let's face it) is more my area. So I've been extremely hesitant to take the plunge.

Until about two weeks ago as my wife and I were watching the Marc Maron show on Netflix. Marc's WTF Podcast is one of my all time favorites and the idea started to percolate around in my brain that something similar would work in the context of gaming and geek culture. A single host, some great stories about gaming, life and experiences, and then great guests from the Eve community and beyond. It can be about Eve, or it can be about anything. Keep it chill, keep it conversational, professional and entertaining. This seed of an idea seemed extremely interesting to me. I finally had a hook I could sink my teeth into.

It remains to be seen (or heard!) if I can actually do any of that! But that has never stopped me before, so I'm going to give it the old college try. My plan is to get 4 shows in the can before launch, so I've already managed to line up 4 guests for the first 4 shows. The show will be weekly at first and if it proves to be worth it, might go into bi-weekly release at some point. Who knows. Right now I'm working on the format and trying my hand at composing some original jazz pieces to run in the background. And trying to figure out how to record from Skype and TS so I can grab those guest conversations and then get everyone lined up to do them.

And then get my own head wrapped around the idea and get some practice reps going. As a life-long background producer man-behind-the-curtain type, taking center stage makes me a tad nervous. But this is why the "hook", the concept is so important. If it is something I believe in, then I'm pretty much willing to go to the wall to make it happen.

So there ya go. I'm excited. And I hope the final result is something that you will enjoy and subscribe to and listen to regularly. I'm going to do everything I can to make it worth your time.