Blood of the Empires Card Game 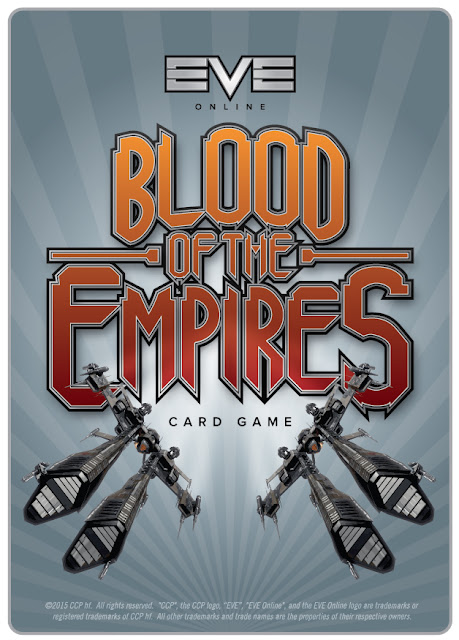 The Fountain War Kickstarter failed to galvanize the Eve Community and resulted in a tremendous amount of drama. (To say the least about it.) But there are consequences to that effort and the results that you may not be familiar with. One of those is a project that I've been working on for almost a year, in fact I brought early game design concepts with me to last year's Fanfest to discuss in private with several people. The concept is called Blood of the Empires and it is (or was) intended to be a new Card Game based on Eve Online.

In talks with CCP I was told that it would have to wait, as "other" projects were being prepared for launch during the same time-frame. So BoE was put on the back-burner and myself and my development team of volunteers (Marc Scaurus and Xander Phoena are two of them) waited to see what the results of the other projects would be.

The BoE Card Game would feature my spaceship art on the cards. With 142 pieces already done, the majority of the work on art is already completed. The game itself is rather simple and brilliant in its execution. Using the Alliance Tournament system for ship values, each player builds a Fleet using no more than 100 points. Then each player does battle with a selection of Action Cards featuring typical Eve related items, tactics, lore, history, trolls, and other actionable items. In this way each player conducts PvP with the other fleets until only one player is left standing. Depending on the number of players, a typical game session should run about 30 minutes.
However, as many of you well know, I'm not in a financial position to outlay thousands of dollars to build test decks for something that may or may not happen. I strongly believe in the project, I think the game will be amazing, but I have enough trouble making my mortgage every month. Much less bankrolling concepts that use someone else's IP. An IP I've had enough trouble with over the years I might add.

So, as usual, I'm turning it all over to the Eve Community. Anytime I have problems I can't solve I turn to you. I don't like keeping secrets and it is time this project became public. As I said many times in the wake of the Fountain War Kickstarter, the community can decide for itself what it wants to support and what it doesn't find worthy. And I believe in the power of those words enough to let this project come to light.

There are those at CCP who might be upset at me for publishing this post. I can't help that. I'd hope that they would understand the reasons why it has become necessary. I simply can't invest the time and energy needed to complete the card game, play test it, build test decks, all on the "maybe" of something happening down the road. With the potential fear of yet another "modified" Fountain War KS in the works, that raises its own concerns. If my original timeline had held, all of that would have happened already, the KS would have launched this week and we'd have completed decks finished in time for Fanfest.

So what now? I would like to see this game see the light of day. But I don't know what to do at this point. So I'm laying it out there for the community. What happens next is anyone's guess. If this is something you'd also like to see happen, then make your feelings known. If you can help in some way to make this happen, then please let me know. If you have suggestions, advice, or other comments, then I'd like to hear those as well. This community of ours is incredible in so many ways, we tend to figure things out for ourselves eventually. So maybe something positive will happen and we can move forward together.

And maybe, if we're lucky, one day we can play Blood of the Empires together. I'd like that.

PS: Let me say this clearly. Anyone who wants to get personal should not do so in the comment section of this blog. I will delete your comments.