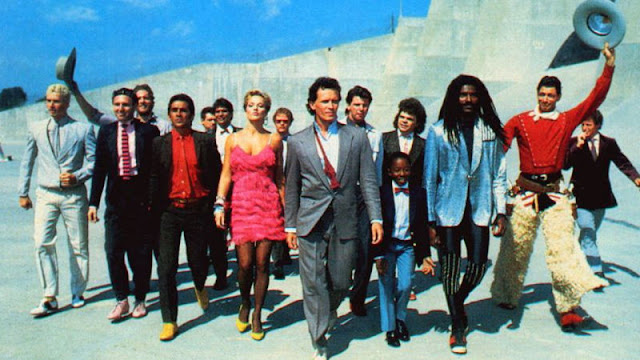 Yesterday the news broke that Kevin Smith will be making a television series based on the 1984 film The Adventures of Buckaroo Banzai Across the Eighth Dimension. Just last week I was watching Kevin's review of Captain America: Civil War over on his YouTube series Fatman On Batman, admiring his custom made Banzai Institute jersey. So obviously he is a fan.

As am I. In 1984 I stole the original one-sheet from the local theater and I've had it ever since ("stole" is a harsh word that involved an insider friend and an extreme act of long-term borrowing), hanging on various walls over the proceeding 32 years. I became a member of the first Team Banzai Fan Club and, at various times, have supported various fan efforts over the years. Signing petitions. Making suggestions. Sharing an email string once with Earl Mac Rauch the writer. I once pitched the idea of a BB Comic Book to Marvel. I wrote a treatment for it and even had some art concepts to show, nothing ever came of it. I still have my Team Banzai metal pin. So yeah, I'm a fan also.

So what is it about this weird, quirky, nerd wish-fulfillment story that appeals to weird, quirky, nerds? You might as well ask about that watermelon in the corner. The eighties was full of strange, off the wall, weird science-fiction wish-fulfillment stories, from Misfits of Science to Weird Science to War Games and SolarBabies, the low-budget, low-rent corner of the market was full of teenagers discovering strange powers and living their dreams. But even among those films that had come before, BB was an oddity. It stood out at the time for those of us lucky enough to have seen it in the theater. It wasn't a hit by any measure. And the fact that I saw it more often in art house cinema shows in the following years, only served to grow its "cult" status.

If I had to sum its appeal up in one word, I would use 'earnest'. While BB is goofy, often silly, and weird in many ways, it plays all of it straight, serious, and earnest. It is also, amazingly for its time, an extremely great example of an all-inclusive, no matter how weird you are, family that accepts you no matter what. BB is a family story. Not about your family, or for families, but about A Family. No matter who you are, or who you happen to be, BB treats you the same. The internal story celebrates the odd, not as something to be made fun of or ridiculed. But something to be celebrated. At one point Buckaroo is working in the operating room with Jeff Goldblum's character, they are operating on an Eskimo kids brain, and Buckaroo invites him along with Team Banzai. At this point they are both super serious brain surgeons. The next time we see Jeff Goldblum's character, who we learn is called New Jersey, he is dressed to the nines as a weird over-blown Cowboy. In another story this revelation would have been played for laughs, but here it barely gets a mention. Buckaroo simply asks him, "What are you supposed to be?" And his answer, "New Jersey", is all that needs to be said. He is immediately part of the family.

BB made you feel special without beating you over the head about it. You were special because you aren't special, turns out there are a whole bunch of people just like you out there in the world. You are not alone. Sometimes these people get together and play rock and roll music in a band, sometimes they perform brain surgery, sometimes they bore holes thru mountains by way of the eighth dimension, and sometimes they have to save the world. Or put the President on hold. Because that is just the way things are.

To me that is the heart of Buckaroo Banzai and the reason it has endured. That and an amazing cast, whip smart writing, a killer soundtrack and a lot of fun. It is, and has been, a very special moment captured in time for over three decades. Can it be re-captured? Can the genie be put back into that specific bottle for another generation?

If the new effort can stay true to the core ideals that made BB work in the first place, I think it has a shot. I think Kevin Smith certainly has the potential to capture the spirit of the thing. So many pieces have to fall into place just the right way, but they can. It happens. I never would have imagined a series based on Fargo would be any damn good either. And if that can happen, then maybe we can finally have our World Crime League after all.