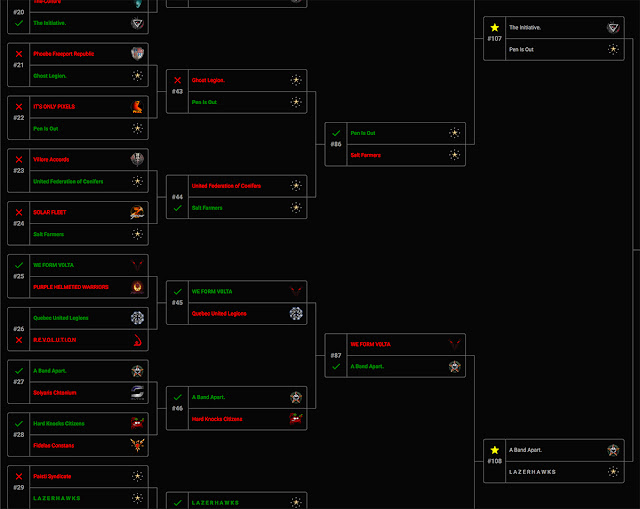 The astute reader will notice that this is my own betting bracket from the Alliance Tournament. As I've said before I made my bets the day before the AT started and I haven't changed a single thing since then. (Tbh I did change two matches that no longer had either of my original teams in them, but that was in the losers bracket)  There are eight teams left undefeated and we happen to be one of them.

Tomorrow we face Lazerhawks. I don't know much about them, although I do know they often bump into our own WH operations from time to time. We've also practiced against them once or twice. Once for sure. This isn't a grudge match as far as I know, just two teams trying to prove themselves that happen to bump up against each other along the way. I'm sure it will be a good fight and well played. And we are not taking them lightly or anything stupid like that. I'm sure they are not taking us lightly either. I wish them the best of luck. But, of course, I hope we win.

For our Alliance a win tomorrow means we will go further into the AT than we ever have before. A loss tomorrow also means the same thing. Either way we go further. That is a HUGE accomplishment and the fulfillment of everything I had hoped for this year. The only thing I really wanted from our team was to make a better showing than our Top 16 finish (#14 overall) from last year. And no matter what happens tomorrow, we've already accomplished that.

Everything after that is gravy. But what tempting gravy it is. Getting this far, especially without a loss yet, is intoxicating. You can't help but look at the brackets and start thinking about what if scenarios. What if we win both matches this weekend? Can you imagine? Can your brain even comprehend an ABA vs Tuskers final? Mine can't. The human brain is a mysterious thing, I keep telling it to stop thinking past tomorrow's match. But it doesn't listen.

Seriously though, one match at a time. We have a determined foe to face tomorrow and, if we manage to win that one, another determined foe on Sunday. If we manage to escape those fights with another weekend ahead of us, then that will be... something to deal with later.

Who knows what will happen next? No one. That's why we fight the damn things.

Onward and upward to glory.