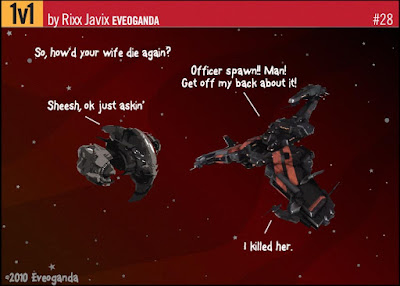 This was ill-advised. No one liked it, not even me. The color I mean, the comic itself was just as dumb as any of the others. I thought I'd try color for once, but it didn't work. For whatever reason the comics worked better as black and white art. When I first started doing the 1v1 series I would come into work (This was back when I owned my own advertising agency) and draw them in ink on the back side of a company memo pad. I would then scan them in, invert them in photoshop and publish them. That worked pretty well for awhile. But then I grew tired of doing them that way, so I started drawing them in Illustrator instead.

It's funny now, but this was the start of me drawing spaceships in Illustrator. Over the years I would bang around with doing it in certain projects here and there, but I had no real aspirations in regards to doing illustration work. I hadn't been an illustrator since I had started out in the comic book industry in my late teens and early twenties. Before my first wife forced me to quit doing it.

Sometimes I would draw a cartoon or something for work. I'd often doodle in my sketch pad at work. In those days I focused on becoming a designer and a photoshop expert. And then a video editor. And then a special effects 3d artist. Then a creative director. Then a card designer and sometimes illustrator. Then other things. I could never stop trying new things. I never could. My ex-wife instilled in me a belief that I was never a "real" artist. She believed that the computers I worked on did the real work. She never used a computer. I knew better of course, but years of that crap had an effect on me.

And then, one day, during one of our countless divorce meetings - in front of everyone - she said it out loud. I was not a real artist. It is hard to convey how horrible this made me feel. I knew it was silly and that I shouldn't take anything she said to heart. But I determined then and there that I would go out and create an opportunity for myself to prove her wrong. Not to "show" her, I couldn't care less what she thought. I still don't. But to prove it to myself.

Within a few short years of that meeting eight of my illustrations were produced by CCP and sold internationally. I sat in Harpa in the middle of the Atlantic ocean on the island of Iceland (of all places) and signed copies of my posters. They were the biggest selling item at Fanfest that year. We sold 1,100 copies.

I've never told anyone that side of the story before. Except my current wife. That little color cartoon made me think of it and I thought I would share it with you. Sometimes, when someone on Reddit or somewhere, slams my art for not being "art" I can get a little testy about it. This is one of the reasons. But it also makes me feel for all the artists, creatives, illustrators, and others out there whose work is often cast aside, by one group or another, as not being 'real'. I know a lot of these people. Multi-media artists, video artists, musicians, printers, so many that work hard and create amazing and fantastic pieces. I feel for them as well. Because many people don't consider what they do to be real either.

I'm no one special. I have my own faults and I have a long way to grow as an artist. But I've been a creative my entire life. And I will be one until I die.