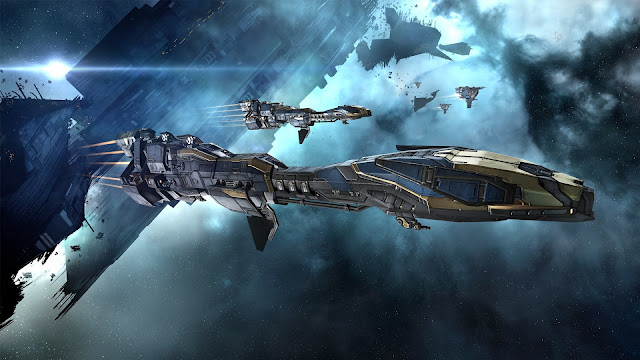 One of the best things about Eve, for me, is what I like to call the "enduring mystery". I've been playing this darn game for nine plus years now and, especially during the last six years, all I really do is undock and fight other players. I like to believe that, while I continue to be 'terrible at Eve', that I've gotten relatively decent at Player vs Player combat. I don't brag. I don't really talk about it much. I don't follow my kill-board. I don't care if I live or die when I go to engage. I do care afterwards of course, I'm also not an idiot. (Those are two different things, the before and after engagement mindsets, not the idiot thing. We can argue that one, I have my detractors.)

But no matter how good I get every once in a while something happens that I can't explain. Sometimes it is losing an engagement I was sure I should win. Sometimes it is something else. I've long theorized, and mentioned to people who tend to nod politely, that perhaps the Eve server isn't as tightly wound as we are led to believe. Weird things often happen. Glitches maybe? Ghosts in the machine? It is a possibility. Not that long ago I remember jumping thru a Null Sec gate and coming out about 27 jumps away. I can still remember undocking to multiple copies of myself. Or having a ship on top of my pod inside the station. So glitches do happen. Or have happened. What if they are just more subtle these days?

I don't have a current good example to share. Last night I lost my recently fitted Stabber to another Stabber. Which is not a good example. While I feel as if I should have won that fight, it is always possible that I shouldn't have. I have to start by admitting that possibility. However, I did just recently slaughter a similarly fit Stabber with the same Stabber. Someone pointed out that perhaps the other pilot was using boosters. I don't typically use drugs myself. I will sometimes lug a Blue Pill around if I'm flying a larger shield boosting ship and I'm expecting a big fight, but generally I don't partake. That is also possible.

Another possibility is that I simply derped. This does happen sometimes. As those of you who have engaged in PvP have noticed, things happen rather quickly. It is a game of split second decisions compounded on top of one another. Don't let anyone fool you, sometimes one small wrong decision can escalate into a problem before you can fix it. And then... pod express. It happens to everyone. Even those that like to think otherwise. I will admit that I did make one error in that fight and that it might have compounded. My drones happened to be lights, left over from a Frigate gang that ran instead of engaging. A couple of Mediums might have helped.

Either way I said good fight in local as I always do. And it was very close. It isn't that specific fight that I'm really talking about anyway. The enduring mystery of Eve may not be technical. Or based on server glitches, or ghosts in the machine. The enduring mystery of Eve might just be unknowable. A complex pattern of tiny little decisions and constant updating that often seems weird.

Or this almost 15yr old constantly updated game has got some crossed wires somewhere. And every once in a while they catch you off guard.

Just a random ponder for a Tuesday. Nothing serious.