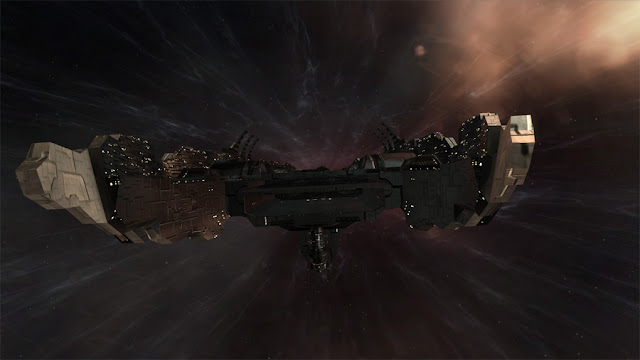 A couple years ago Stay Frosty moved from Ishomilken in the north of Black Rise, to our current home base on the southern border of Black Rise in Verge Vendor. The move, for me at least, was a nightmare. At the time my personal life was slightly stressful (to say the least) and I had to move not only my own holdings, but those of the Corporation as well. Even with help it was chaotic, stressful, and time-consuming.

In all of that back and forth I never got around to moving my alt's Archon. Despite many back and forth transport trips, the Carrier landed in Isho and managed to stay there. Any time I thought about bringing it down a war would break out, or something else would come up. A Carrier in Low Sec is not a super high priority, so it just kept getting pushed down the priority list.

Skip ahead a couple years.

Anytime I'd look at it in my assets windows all I'd see would be an Archon in a hangar with some fuel and a bunch of T1 Frigates and some random mods. Last week I happened to mention this situation to Devlin and he has an alt that can fly Archons. So we agreed to finally bring her down to our staging system. It turns out that she was FULL of things!

Fully fit ships mostly. Imagine my surprise when I opened the hangar and discovered fully fit ancient ships that had been long forgotten. A fully fit Bhaalgorn and Phantasm. A weirdly fit Proteus. A time-capsule to another time with a 100MN AB HAM Tengu! Remember when those were all the rage? A Gila fitted with HAMS. Heck some of these ships had lost entire slots in the intervening years. A few couldn't undock because they had more drones inside their drone bays than you could have. lolz.

I've admitted before that I tend to hoard ships. Not to keep, but to have on hand for any fight that comes along. I love spaceships and I like having them at-hand when needed. On the one hand I am very protective of my ships all while often throwing them at things for a good fight. I have no problem exploding anything I own, but I'd rather explode the other guy's ships instead. But this discovery was like opening up a time-capsule to another time. It is hard to remember what some of these fits were even for? But being a poor Pirate who likes to have several hundred ships ready to undock means I can't just throw away fully fitted ships. It causes me pain to destroy a rig once it is attached to a ship. Last weekend I flew an Arty Shield Sleipnir into battle even though it still had a armor rig on it! That poor Sleipnir had been re-fitted so many times it got confused. I could have destroyed that rig, but I just couldn't bring myself to do it.

So I spent some time trying to update these old-timey ships. Luckily the T3's can switch rigs without destroying them, which is awesome. I even re-figured the platforms a bit, especially on the Proteus. It is still a weird ship, but it is less weird now. The rest just needed minor adjustments and changes in modules.

This was like finding buried treasure. And now all of these ships are marked as slightly more expendable than regular ships. I already recklessly used the Bhaalgorn to kill a Megathron the other day. Having been lost for two years they already feel like they need to stretch their legs a bit. And if they explode? Well then, isn't that what spaceships are for?