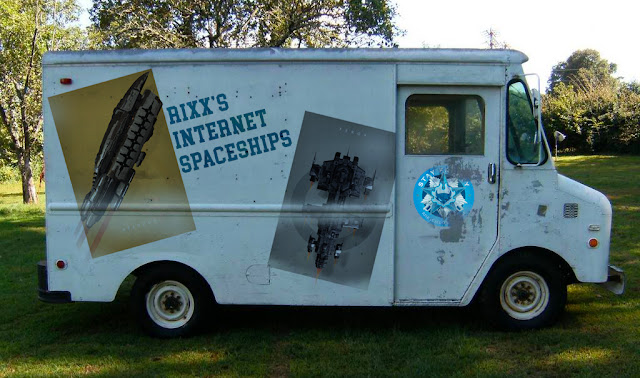 What a long strange trip this has been.

You won't be surprised to hear that I love Eve. And over the past decade I've tried to express that passion creatively. I've created thousands of pieces of art, propaganda, memes, logos, videos, podcasts, wallpapers, merchandise, and other projects as an expression of that passion. I've worked with countless players to help support their projects, charity events, programs, player meets, and so many other ideas that if I listed them all your head would spin. And over the past decade those projects have often involved CCP in one way or another.

I create things out of nothing. When people ask me what I do for a living that is often my answer. Because it is true. I always have. It's funny looking back over the past ten years of Eve and realizing that I've been doing that exact same thing from the very beginning. It is, after all, the heart of what Eve is all about for each of us. We all create a character from nothing and work tirelessly to turn it into something. Whatever that something ends up being, it is in so many ways a direct expression of our own creativity. I know Rixx has been that for me.

So who could blame me when I tried to do the same outside the game? Despite what many people choose to believe, I didn't start that. CCP did. Way back in 2009 I was asked to create a proposal for my company to run CCP's Social Media and PR. Which I did. Naturally that got me to thinking. What else could CCP need help with? And I know you've already seen this coming - Merch. And I won't regal you with the long, convoluted and sad tale (that is what Archives are for), I'm sad to say not much has changed. They still seem strangely hesitant to put spaceships on things. Which is really the secret sauce when it comes to Eve Merchandise. And Eve Online itself. That was the lesson we all learned from Incarna - it's the spaceships.

I had one huge success when it comes to working with CCP. One that I remain proud of to this day.

Sadly that project got mixed up with some people leaving CCP and some unfortunate miscommunication issues (all of which are resolved) that resulted in it ending up at the wrong place to be sold. And it was all downhill after that. It was all handled poorly by the people involved, none of whom are even with CCP any longer. I'm still proud of the work and the overwhelming response from the community.

If I've learned one lesson from this journey it is this - only do it if you love it. Don't do it for any other reason. Because down that path lies frustration. And in that spirit I'm not even going to mention all of those frustrating journeys down various frustrating paths. That is all in the past now. I made the decision long ago to start down a new path, one that doesn't really involve CCP anymore. At least not as a company.

It all comes back to people. When I started thinking back over the last decade in writing this series, I quickly realized that all the good things - the positive energy - always came from working with people. Both in the community and at CCP. I've always had great relationships with the people, the developers, the artists, the community team, and others. And I've always had nothing but problems when it comes to departments, be it the infamous legal department, or some other.

So now I create for myself - to give to individuals. My wife and I both enjoy handing out swag that I've created. At Fanfests and at our own Steel City Eve events. In just the past couple of weeks I've mailed several dozen individual packets to specific friends in the community. And in Eve Vegas I'll be donating a unique piece of digital illustration to the charity auction. As well as handing out new swag. And, as always, I'll keep creating and supporting community projects - just as I always have.