Despite having been to Iceland three times now, this will be our first time at Eve Vegas. We've had plans to attend at various times in the past, but given the situation... well it just never seemed to work out. Or make sense. Or even come close to being possible. But this year we determined way back during Fanfest that we'd make it happen. So we are coming to Eve Vegas this year.

A big part of the hump for us to get over is our feelings about Vegas in general. Neither of us are gamblers, or frat members, or lost souls trying to recover something, or newlyweds without imagination. Or desperate to get hitched. Or lost on the way thru the desert. I guess I could go on and on trying to imagine why anyone would purposefully spend time in the middle of the desert in a city that should (all things being logical) not exist in the first place. But, after all, that is Vegas in a nutshell isn't it? America's future ruins. Just waiting around for someone to wise up and turn the water off.

Anyway, we got past that.

Years ago I was in the California desert shooting some commercials and on a break day I drove to Vegas, went up and down the strip, stopped in a few Casinos, and then drove back to Bakersfield. Got a speeding ticket on the way back for my troubles. Other than that, I've been at the airport a bunch of times. But I've never really been in Vegas for any amount of time. And neither has my wife.

So we are (despite all the preliminary stuff above) really looking forward to it. The best part for us will be the opportunity to meet people that we've never had a chance to meet before. And the chance to hand out more swag! You all know how much I enjoy that. So we printed up some brand new stickers, buttons, and even Alliance pins to give out. In addition I'm getting a very special print made of this digital illustration: 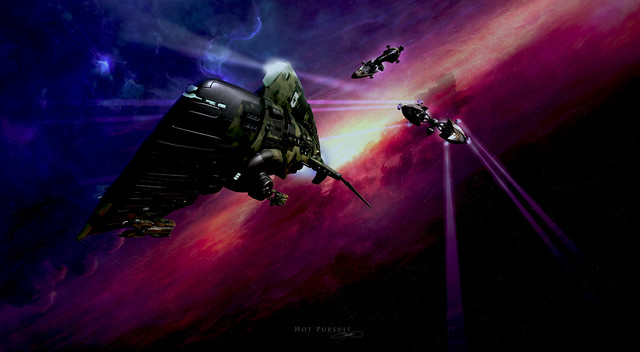 The process is called a Lumachrome Acrylic Print and from what I've seen from the test print they did, this sucker is going to be incredible! This is not an ordinary print, take a look at that link, it should literally glow with color and depth. I can't wait to see the final print myself, we're driving over to the printers first thing the morning after we arrive to pick it up. The print will be part of the Charity Auction, so if you are there you'll have a chance to take this one-of-a-kind framed illustration print home with you! And don't worry, we kept the size manageable in case you need to have it shipped or carried home on the plane. I'll even be there to personally sign the print if that is something you'd be interested in.

We are excited. And I'll mention, just like I do before Fanfest, please feel free to introduce yourself to either of us. We want to meet you. Don't be shy. You'll most likely get some swag for your troubles. So it is totally worth it.

I'm sure I'll be posting more as we get closer and then share stories, photos, and other memories once we get out there. I'll also mention that we are also going to be attending Eve London this year in November, so if you are on the fence about attending that meet - you should go. Cause we'll be there! And someone needs to buy us beers.