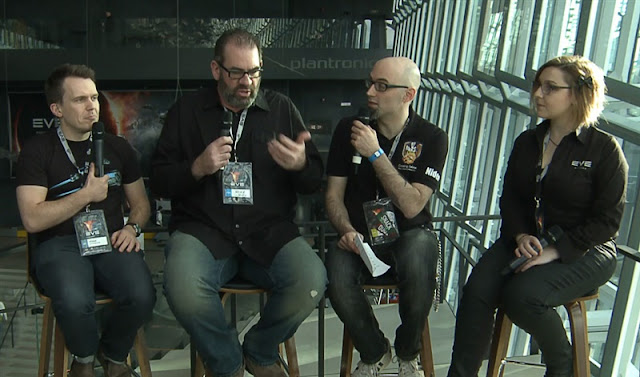 The first time I met CCP Guard in person was LIVE on the Fanfest stream during the 2015 Fanfest. I was on to talk about my new line of illustrated posters. You can't tell from that photo but my head is spinning. That entire Fanfest was nothing but a blur. Everyone I met back then was the first Eve player or person from CCP that I had ever met. Up until then I had never met anyone in real life that played Eve, or worked at CCP, or had anything to do with Eve.

I never got to spend a lot of time with Guard. If you've ever been to an Eve meet before you know that he is little more than a blur of motion. Constantly moving. If you manage to get a few minutes here, or there, or in line, or in an elevator, or at a bar late at night - you are lucky. We had those moments. More than a few.

And over the last decade I've used Guard in more than a few memes. The iMac in my home studio has his picture as its icon. And I can't begin to relate to you the number of times he has helped in big ways, small ways, and in other ways over those years. From community contacts, to answering questions, finding out information, coordinating charity work, and in thousands of other ways that he probably doesn't even remember. Heck, that I probably don't even remember.

Guard has been a constant. His energy and passion permeates everything he does. I'm sure that he has no way of knowing or truly appreciating the impact he has had on the Eve Community. Those of us who truly care about those two words know, and we truly appreciate that he is the heart of us. Others are important certainly, and this is not intended to take away from the impact so many have had. But Guard is our dynamo, our spark plug, our little engine that could - and did. Frankly we didn't deserve him. Not his energy in front of Permaband. Or his constantly popping up all over the world at player events. And he did this for 16 years!

Whatever life holds in store for you beyond Eve - you will be great. And greatly missed.

I wish I knew you better. And I wish we'd have had a chance at that Space Jam duet on stage one day. (Which is a terrible idea!)

Thank you for all you've done for this great community. And maybe next time we are at an Eve event you won't be moving so goddamn fast.