Eve is a Flat Circle 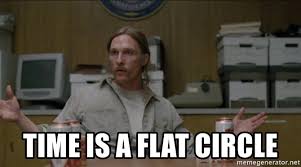 Time might be a flat circle, as Rust Cohle mentioned in True Detective season one, but so is Eve. In fact, Eve is even more of a flat circle than life ever could be. All you need to do in order to experience this for yourself is hang around long enough to see it in action. And maybe attend a few player meets here and there. Nothing brings out the weirdness of Eve time like meeting people that play the game over a few years.

Back in the early days of this blog, when I was writing almost every day, I would constantly have to preamble my posts with introductions and recaps. A few longer term readers would get annoyed by it and a few select haters would use that tendency against me. As if introducing new readers was a weakness or something. Thing is, as Hilmar recently pointed out, Eve brings in new players every day. I believe he mentioned 10,000 a month as a number. Granted, most of them don't stay around long (sadly), but that is a lot of new players.

This hits me every so often. It hit me again in Amsterdam. Lots of new players I've never met in person before. The typical hello, who are you? I'm Rixx Javix. And then a blank stare. Hmmm. (I hope we are all on the same page, this is intended as tongue firmly in cheek.) But despite being funny and also humbling (which I don't need more of thank you.) it is also indicative of the flat circle nature of Eve. And also of how little Null Sec players pay any attention to anything that isn't Null Sec related. I was even mistaken for a Streamer by several people, who I gladly let continue thinking that. Far be it for me to correct them. They seemed 100% sure I was a Streamer. And that they used to kill me "alot" back in the day.

I find all of this endlessly fascinating. It is after all only a microcosm of real life. No matter what you've done or accomplished or written or acted or otherwise lived thru - when you meet someone new they have no idea. Unless you are famous. And then you might be surprised by what they know you for. It might even be totally wrong. This is why resumes and CVs exist. Or the entire point of LinkedIn. A small summary of your work life and history. So people can make snap judgements about you in peace without any messy feedback from you. lolz.

And so it goes. And no, not everyone I met in Amsterdam didn't know who I was. But some didn't. And some thought they did, but they didn't. Like I've said before, it is all endlessly fascinating to me. I enjoy it all. And it is part of the process of meeting new people. Establishing ourselves. Sharing what we want to share and holding back whatever we want to save for later. Little synopsis bit of ourselves.

As time goes on it becomes clearer to me how much Eve itself is constantly being churned and rotated around. Eventually it all becomes an endless circle of birth and death and rehashed movements. Both on a personal micro and larger macro level.

Just some musings for a Monday.