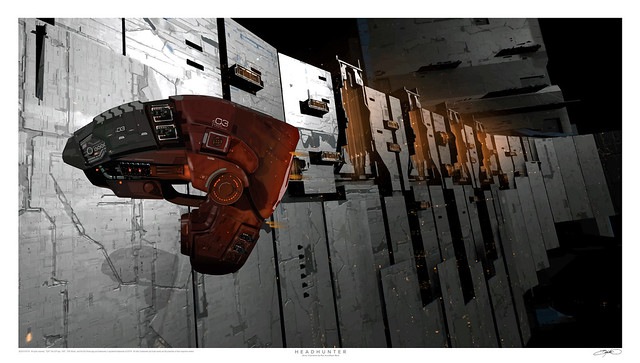 I was trying to find something on the Interwebs this morning and happened across this (almost) six year old Community Spotlight: Eveoganda that CCP ran about me back in 2013. Roughly the half-way point of my Eve career as of this writing. The funny part is that article ran well before what I consider to be the most active portion of that career. Two years before the 8 poster deal with CCP, and our three trips to Iceland, before Vegas, before WWB, before the AT Tournament runs, before so many things. But mostly before the huge creative output that started with the Art Prints that led to the poster deal with CCP and everything that came after that.

Which just highlights yet again just how quickly five or six years can get behind you. I've been at this game now for over a decade. I've quite literally produced several thousand pieces of art and logos and paintings and drawings and memes and goodness knows what else. Not to mention millions of words here on these pages. You can't move around the Eve universe without bumping into my work. And while that is awesome, it does beg the question - why?

It is an easier question to answer now in hindsight. It is often challenging to see yourself clearly in the moments of your active life. But often, it is far easier to look back and see things more clearly. Perspective is a huge part of that. In the moment we have no idea of how things will work out, what the consequences will be, how our decisions affect not only our lives, but those of others.

For me Eve started very simply. My Son enjoyed it and I played pretty much just to have something to share with him. Divorce is hard. My Divorce was nightmarish and legendary. And we both needed a distraction that we could share together. Eve filled that in both of our lives for a number of years. In those early days I had a business to run and my time was limited, but we had Eve. And I essentially just followed him around and tried to keep things interesting. As his interest naturally wained as he got older, my own life transformed drastically. I lost the business and found myself knee-deep in the fight of my life. A fight which took years to finally lose and at great cost. During that time Eve became much more than just a game. It became an outlet. And not always a good one.

I'm the first to admit that mistakes were made. I wasn't always thinking clearly in those days. I could tell you about the huge amounts of stress I was under. The fear. The pressure. The frustrations. Not as an excuse, only in hindsight. But ultimately what happened was far more powerful. We went to Iceland in 2015 and we (my wife and I) met our very first Eve players. And our first CCP employees. And while much of the mistakes that would haunt me for the next two years were handed to us by certain of those CCP employees (none of whom are still with the company), they would all eventually get cleared up. Or swept under the rug. Or replaced. The real point here is that meeting people was the beginning of a much better time. And launched the second half of this journey. A much better and more active half.

I don't think it is coincidence that my real life has also improved significantly during that second half. In fact, I can attribute it (and I do attribute it) to being a significant part of the reasons why. My real life is under a constant state of transformation, my professional life has always been transforming, and I think it is only logical that my Eve life does the same. As most of us do. The only constant is change, after all.

I've done all the things I've done because I had to. I have to keep busy. I have to keep being creative and challenging myself. Eve just became a very natural place to express those desires. And slowly, over those years, the community and the real friends we started making - only made that desire turn into a passion. Today I can't even imagine life without Eve in it. Without the community, our friends, our associates, CCP, Iceland, our Tour Guide friend in Iceland and his dog, our world-wide network of people that we care about and who care about us. It might be weird to some people, but to us it just feels natural now. And normal.

It's the kind of place where hearing about a CCP employee leaving the company results in us jumping on a plane and flying to Europe. With an illustration I spent two days creating. Just to be able to say goodbye in person.

So that's why. In a couple of months we are flying to Seattle to get on a ship with a bunch of Eve nerds for a cruise to Alaska. And when I think about that trip, I don't think there is anything unusual about it.

I can't wait to see what the next five years brings.