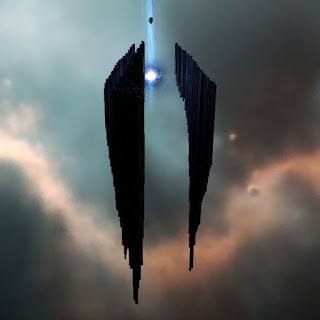 This image is from SiSi and represents the long awaited "Eternal Cyno" Fallen Capsuleer Memorial that has been talked about since the beginning of time. This is different than the Player Monument in Reykjavik, which is a monument to all the players who were subbed at the time it was built. This "memorial" is intended to honor those players that are no longer with us.

Which is great. Kudos to the hundreds of players that have mentioned this idea to CCP over the years. I have literally no idea where they got the idea from.

Let's just skip over all that and get to the meat of the post. It seems that CCP is intending to drop this important destination in Molea. If you don't know, Molea is one of many places in New Eden where players have traditionally dropped name cans in space to honor friends that have passed away. If Eve Forever is truly a goal, then eventually all of us reading this post will someday be counted among them. But there are other places in New Eden that have also served as a temporary memorial site in the past. Not to mention that Molea happens to be High-Security space, which immediately limits the number of people that can visit the site. (It also happens to be Amarr Khanid space, which in my opinion, makes its potential connection to that religion a serious issue from a lore perspective.)

This is an issue that I wrestled with during... never mind. I thought about this problem at various points in the past. New Eden is located in Amarr Low Security space, which is yet another argument against putting the memorial in Amarr space as well. Why do the Amarr get two special destinations?

My thought was to place the memorial on the opposite side of New Eden from the Eve Gate, also in a Low Sec system located next to High Sec. In Lonetrek if you want to place it in Caldari space, or in Placid if you want to go with Gallente. Personally I think the Gallente make more sense from a lore perspective. But I admit to being somewhat biased since I also happen to live in the Placid area of New Eden.

I don't have a strong contender to suggest. I know many people much more knowledgeable than me when it comes to lore, who could probably make a strong case for a better system. All I know is that it should be placed in Low Sec because it is a CAPSULEER Memorial and it should be independent of any of the four Empires. Putting it in someone's Empire space is simply wrong and it should not happen.

What are your thoughts? Where in New Eden should the player memorial be placed?